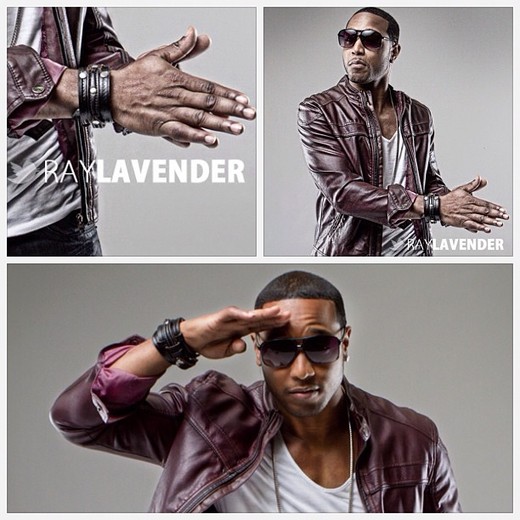 Over the years, Atlanta has introduced its fair share of music superstars to the world, and with the introduction of Singer/Songwriter/Actor/Model - Ray Lavender, that tradition will undoubtedly continue. Coming to Atlanta by way of Monroe, Louisiana, Ray Lavender is quickly becoming one of music’s brightest stars. He offers a sensual yet charismatic brand of music that simultaneously is coupled with mass universal appeal. Growing up, Ray admired a wide array of artists from Sam Cooke to Prince; but it was R. Kelly who truly inspired Ray Lavender to pursue his passion. “When I met him he urged me to continue to write as, well as sing and become an overall hard working musician,” says Ray Lavender.

This work ethic is ingrained in Ray Lavender, as he is still equally passionate about songwriting as he is about singing. Even though his musical peers serve as major motivators, it is from his own life that Ray Lavender draws his greatest inspirations. Coming from a large family of music lovers, Ray Lavender was destined for the stage, but it was the untimely loss of his father that motivated him to make a difference; not only for himself, but for his family.

His career took off while at a studio in Atlanta when a music executive by the name of Andrew "Big Drew" Bryan (now CEO of Global Artist Group), overheard sweet harmonies from a group called Collabo, and was particularly blown away by the lead singer, Ray Lavender. They formed a relationship that prompted Ray Lavender to begin recording as a solo artist, and it was then that the music industry would begin to take notice. Ray Lavender’s tireless pursuit of success gained him the respect of the industry’s top producers including Jazze Pha, Dallas Austin, Teddy Riley and Tricky Stewart. He soon began writing gigs and received an early placement with the song, “Knock, Knock, Knock,” for R&B great Gerald Levert’s A Stroke of Genius album. Soon thereafter, he began working on his own project and linked up with multi-platinum-selling superstar Singer/Songwriter/Producer Akon.

In 2007, Ray Lavender was signed as the first act to Akon’s KonLive Records via Geffen Records. Even though his debut album was never released, Ray Lavender garnered radio and digital hit singles with “My Girl Gotta Girlfriend,” featuring Fabolous & Red Cafe’, “Put It Down,” featuring T-Pain, Against the Grain, featuring Akon, and “Stay,” which was produced by Tank. Ray Lavender has performed throughout the United States, Sweden, and London to name a few. A gifted performer, Ray Lavender has an exceptional stage presence and has toured with some of the industries biggest stars such as Akon, T-Pain, Lady Gaga, Keyshia Cole, & Lyfe Jennings, to name a few.

Although music is clearly Ray Lavender’s passion, a very unique opportunity presented itself in 2010. Ray Lavender starred on Donald Trump’s executive produced reality show, “The Ultimate Merger.” Ray Lavender states, “My father always taught me to surround myself with successful and hard working people, and working with the Trump organization was a great opportunity for me. I met a lot of great people and had a blast winning the competition. Most importantly, however, I feel like I was able to show my fans and the public the real me, which is a hopeful romantic that will do anything for the girl I love.”

Now, in 2012, Ray Lavender is setting up his official CD debut with a series of singles that he has written that show his diverse range and versatility. The universal club popping single “Tequila,” which features his label mate, Jordan Humphrey, an incredible young rising star whom Ray Lavender is developing, just may be the party anthem of the year. The sweet and soaring “We Love” reminds us that it doesn’t matter how tough life can get; love conquers all.

Ray Lavender promises to be a part of a selective group of exceptional artist signed to Rays World Music Group that delivers hot jams to the dance floor, as well as huge ballads for the masses, and the self-titled debut album, RAY LAVENDER, will serve proof of such.