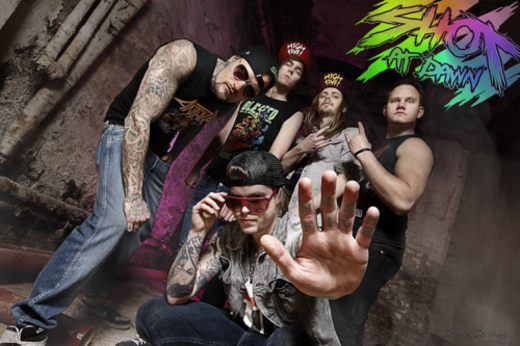 About Shot At Dawn

Just like a serving of spareribs, Shot At Dawn makes you grin for hours after consuming some of their tasty metal. Cause that's what you get from this lively five-piece straight outta the Norwegian land of Norway. A huge grin on your face. And maybe a cheeky smirk. After a party of metal in your ears. Just like it should be

Playing a blend of metal with influences from everywhere and inbetween with an attitude that definately comes from somewhere the world hasn't been ready for yet, it leaves you feeling fulfilled in more ways than you could imagine. Mixing cowbells, banjos and high fives into hard-hitting melodic metal, they run rampant over any stage they play, not shy of showing off their delicious upper bodies and brutal beatdowns

Who likes them, you might ask? Well, for one, they are friends with the almighty Optimus Prime, and have thrown parties even rednecks have crashed. That's not impressive, you say? A robot isn't cool enough for you? How about He-Man then? Dancing. If that's not cool, nothing is. Oh! And there's the ex-ballet dancer in the band. Doing split jumps when his pants allow him to

The sauce of awesome started blending waaaay back in 2006, and after releasing their critically acclaimed debut album "Sic Vic Pacum Para Bellum" in 2008, it was further evolved and got some spice in the mix when their EP "Pre Bellum EP" was released later in 2008. A long list of shows and neck strains later, including three very well received shows at By:Larm, they recorded and released a second EP, "Seize The Night EP" just in time for their appearance at the Hove Festival in 2010

Skip forward a year, and they had recorded their sophomore album before successfully supporting Sepultura and Suicidal Tendencies in two very busy and sunshiny days back in 2011. After which they laid all their effort into finalizing the release of their album, which was released with a smashing release show. Behold! "White Trash Metal Brigade"! An album that has received a great reception with everyone who has heard it. The few who didn't like it have mysteriously dissappeared. Aki claims he doesn't know where they are, but we don't believe him

This is the time! Shot At Dawn in your face! All over it! Always!