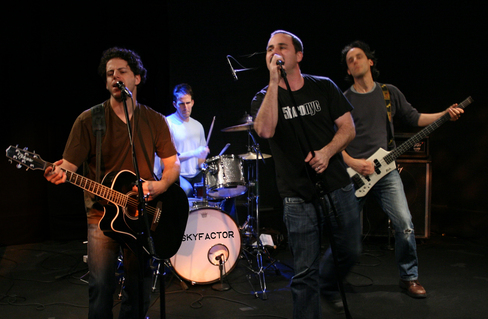 One listen to SKYFACTOR’s brand new release Daydreams and it’s clear these guys know how to craft memorable and powerful acoustic-rock songs that grab you from the get-go -- and won’t let go. SKYFACTOR’s simple but effective melodies combine with edgy dynamics to take the listener on a ride each and every time.

Formed on a rooftop in the East Village of New York City in 2004, SKYFACTOR was born when the musical paths of longtime friends Bob Ziegler (formerly of Brother Rabbit and November Factory) and Jon Rubin (formerly of Sky Blues) finally crossed. Almost instantly the songs started flowing out, and they knew they were onto something. After the extremely positive response to their 2006 debut release Take This Chance, they expanded their sound to include Jon’s brother Cliff Rubin (also from Sky Blues) on bass guitar and studio pro Steve Belvilus, hailing from Guadeloupe, on drums. As a quartet, the group honed their musical chemistry and style on stage for the next two years before heading into the studio to capture the group’s energy and momentum.

Recorded over the course of the past year, Daydreams represents the band in its finest form yet, with personal, insightful vocals backed by a big acoustic guitar and an air-tight rhythm section. Refreshingly spare while layered with deep emotion, the songs have a way of becoming the latest soundtrack-to-your-life before you even realize it. And once you experience SKYFACTOR live, you’ll understand what all the buzz is about.