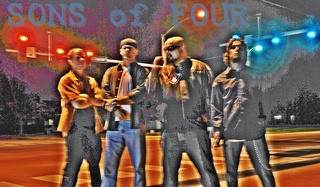 About SONS of FOUR

SONS of FOUR formed it's current line up in September '09. Ourstage veteran Eric Deal reunited with lead singer Steve "Slick" Weimer from their 2007-2008 acoustic band A Slick Deal. Slick wanted to beef-up his band with a tighter/meatier rhythm section: Enter Beau Ewing on drums and Eric, moving to bass from acoustic guitar. Eric has been mainly a bass player from 1990, but went back to guitar when an "unplugged" project presented itself. With Doug Edens on guitar, who has been with Slick for about a year prior, this arrangement met his 'vision' of what a local cover band should be! Hitting a large variety of rock genre's, SONS of FOUR has been playing out since after their 2nd practice together; adding a song here and there every week.
Based out of NW Arkansas, SONS of FOUR plans on taking on the local competetion head-on, with a drive and passion for tight, powerful, and even twisted versions of yesterday's and today's rock and alternative rock!
Stay tuned!