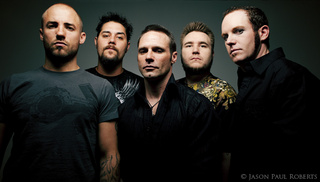 About Spools of Dark Thread

It has been said that music is what binds us together. Music is the vehicle for our ever changing emotions. It lifts us up, calms us down, makes us move, and stirs up distant or not so distant memories. There is nothing like a band that takes us on an ever-evolving adventure. Spools of Dark Thread is that band. With a growing and loyal fan base hooked by driving melodies and energy charged live shows, Spools of Dark Thread has proven to be a top musical force in the rocky mountain region. Touted by both large market radio stations and the regional press, Spools of Dark Thread is destined to be the next national success story hailing from Colorado.

Spools of Dark Thread just released their 2008 e.p. with the help of Dave Fortman (Slipknot, Evanescence, Mudvayne), John Shipp (Godsmack, Aerosmith) & Tom Polce (CBS Records). Spools of Dark Thread have created a hard-hitting and risk-taking sound. Passion and experience are what truly separates this band from the rest. They have never swayed from their primary objective to forge an authentic, visceral sound which is captured in every “Spools” live show.