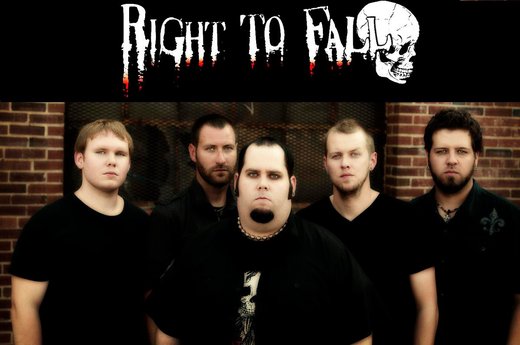 About Right To Fall

In January of 2010, Jeremy Scott, Mike Earle, Jarred Boltinhouse, Chris Johnson, and Brandon Christensen came together to create Right To Fall. After months of searching for the perfect lineup and an unyielding drive to put together a band that would separate itself from the masses in the Columbia, SC scene, the guys immediately set to work writing original material and in a surprisingly short time they were producing songs with a foundation in such bands as Breaking Benjamin, Shinedown, Soil, Thirty Seconds To Mars, Bullet for my Valentine, and Killswitch Engage.

Truly the cream of the local musical crop, the unrelenting rhythm of Brandon Christensen and Chris Johnson are the foundation on which the bone shattering riffs of guitarist Mike Earle can construct a truly original sound. The guitar work of songwriter Jarred Boltinhouse is a perfect fit to this equation, adding harmony and a uniqueness to Right To Fall’s music that is truly original in scope. The relentless vocals of front man Jeremy Scott complete the experience, and songs like “Change” and “Turnabout” give the band a radio-ready sound, while other songs like “Through Death Shall We Part” and “Dissent” allow them the ability to cross into a heavier genre without alienating more commercial fans, ensuring that Right To Fall is a band that will doubtless be emulated, but seldom matched.

When Right To Fall takes the stage, they provide a nonstop, in your face live show that is unrelenting from start to finish, with a level of energy that is rarely seen in local bands. The members have an impressive collective resume, having played in venues across the nation and shared the stage with such bands as Shinedown, Tantric, Soil, Crossfade, Trust Company, Seven Mary Three, Social Burn, Saliva, Flyleaf, and Sevendust. Right To Fall's members have also spent extensive time touring over much of the continental United States

Right To Fall is working diligently on writing new material and preparing to go into the studio to begin production of their debut album. They are also working on booking local and regional shows. Since they began booking and playing shows in June of 2010 they have played with bands such as Smile Empty Soul, Sent By Ravens, Adema, Taproot, and many other local favorites, building a steady but undeniably impressive fan base. They were also declared the winners of the 2011 Ernie Ball Van's Warped Tour Battle of the Bands for the Charlotte, NC venue, and were invited to play the Ernie Ball Stage at the Verizon Wireless Ampitheatre. In the winter of 2011, Right To Fall won WARQ Rock 93.5's "Locals Live" competition, beating out the best in local musicians in their hometown of Columbia, SC. Right To fall also recently completed their debut music video for their newest single, "Change," working alongside Gustavo Montana from At Dusk Media. The video has generated quite a bit of press for them, even earning a nod as one of the best music videos to come out of S.C. in 2011

"Right To Fall swings a powerful musical pendulum between melodic, commercially palatable hard rock and some seriously unhinged and pound-your-face-in heavy metalcore. Singer Jeremy Scott is the band's biggest asset, switching from singing to near-screamo howls in an instant while the guys playing the instruments follow in an impressive lockstep." -Kevin Oliver, The Free Time

"Change" (is) a charging hard rock song that slips into a depressive state. The band's presence allows slivers of light to shine through, though walking out of the darkness isn't quite assured. Nice. -Otis Taylor, The State Newspape

"Change" was released in audio form last week, and it's a monster track that showcases the multiple personality disorder that is vocalist Jeremy Scott, who can effortlessly go from a melodic Chris Cornell style to windpipe-strangling screams and back." -Kevin Oliver, The Free Time

"Right to Fall play a radio-friendly brand of hard rock. It’s the kind of music you want to play when you’re sewing a black, sleeveless sweater with needles made of sharpened ribs. It’s heavy, it’s gritty, but there’s melody underneath all the aggression. " - Zach Roth, Decoy Music