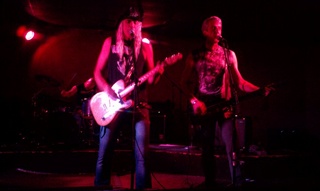 Tuff old rockers who miraculously survived the original melee in the 70’s and 80's. Met up in Fenix 30 years (damn) later to wreak havoc.. and score free drinks!

ViC TiMs - Vox/Guitar. Born in the back seat of Greyhound X-Class Starcruiser Transit rollin’ down highway 1,000,041 on the Andromeda Expressway, Tims was raised by his hippie parents following various bands like Xmorph, SsHdank BaaTru, and The Grateful Dead. Tims is vacationing on your planet while his lawyers settle a discrepency with the Intergalactic Revenue Service. His main rig is a Strat thru an Evil Twin, but uses alotta other stuff too.

T.I.T.S. - Drums/Cowbell. The Incredible Terry Silveus! Lovin the Ta-Tas? Clever Nickname? Both? Born in 1970 thanks to a Black Sabbath concert and lots of substance abuse, Rock and Roll is in his blood. Major influences are 80’s Glam (Crue!), 70’s Metal and Punk (Stoner Rock Forever!). T.I.T.S. has played in Chicago, LA ( Hollywood, Big Hair, Makeup), Flagstaff and Phoenix. He plays a Tama Star Classic Birch kit and Zildjian Cymbals.