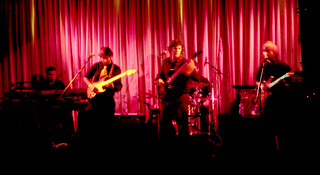 About The Van Buren Boys

A fun-loving and animated bunch, the Van Buren Boys strive to make each concert experience unique. Whether it's reenacting a tree falling during their Latin-tinged tune "Arnold Timber" (about a tree falling on guitarist Greg Smith's house), playing a gig wearing bathrobes in the cold of winter, or creating a dub heavy reggae remix of "Santa Claus is Coming to Town" for their Christmas show, the Boys go to great lengths to make each song and show a special moment.

Although billed as a cover band, the VBB always brought a personal approach to each song and the group's developing individual style naturally led to original compositions.

Each VBB original song is laden with the fingerprints of all five members. The style of the music ranges from funk to progressive rock to electronic dance grooves to anything that fits the mood.

The VB Boys are named after the eighth and greatest president of the United States and reputed lush, Martin Van Buren, and take every opportunity they have to honor their commander in chief by bringing the party everywhere they go. As often as they can, they throw specific events with wacky themes (see A Verry Van Buren Christmas, The First Annual Bathrobe Bash, and The Mustache Ride (an inter-band moustache competition, just to be clear)) that are fun for their audience and keep them coming back for more.

The VBB have played such big stages as Johnny D's in Somerville, MA and The Canal Room in New York City and have a residency at The Tavern at the End of the World in Charlestown, MA.

Look for the band's first studio release in the summer of 2009.