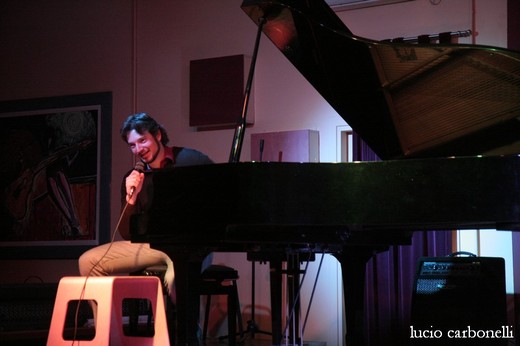 Biography:
Bruno Bavota was born in Naples January 13, 1984. The appeal of the music will come "only" twenty years later. Until then the music was a faithful companion of his daily emotions. One day he decided to reach out to a left-handed guitar, owned by his brother, left for years on the sidelines. From that day the Music has decided to save his life by covering it with a huge, warm hug, from which comes the echo of his deepest emotions. A few years later discovers the piano, whose strings will replace those of the heart, naturally, to vibrate to the world his love song.
Curriculum:
Currently busy with his eponymous solo project at the piano, working on the studio recording of the upcoming album "La Casa sulla Luna" (The House on the Moon) in output for the label Lizard Records.Pianist of the Neapolitan band Adailysong, working on the arrangements of the first official album.
November 2008: The Mighty Thought the song is included as a soundtrack to a spot (job opportunity) http://www.opportunityjob.eu/

October 2009: The Last Thought Before the song Good Night is on the soundtrack for the american film "Power of Purpose", a film about suicide prevention - http://www.powerofpurposefilm.com/

2010: the song My Smile (instrumental) is inserted for the advertising campaign for Doria Insurance policies: second risk, legal protection and gross negligence.http://www.doriabellisario.com/secondorischio.html

August 2011: Gets Adailysong with participation in the "MusicaW Festival" opening the concert of Italian singer Paolo Benvegnù
September 2011: Gets Adailysong with the final of "Premio Valentina Giovagnini" (national competition)
October 2011: Participates with the final Adailysong "Biella Festival" at the Theatre Villani of Biella.
November 2011: It is inserted in the "Compilation Zimbalam" among the best artists of 2011 with the song "Il Pozzo d'amor" (Love's Well) that the title of his first album.
March 2012: Selected as a pianist and keyboardist for the competition "IndiEPendente" which will give up due to personal problems
April 2012: Returns to Palermo to perform with his music during the performance of music / dance / poem "Il Sogno" (The Dream) at the Conservatorio Vincenzo Bellini.
Gets Adailysong with the finals of national contest "Va Sul Palco" at the Twiggy Club (Varese)
May 2012: Gets the band Adailysong the final of the national contest "Future Contest" Live at the Crossroads Club (Rome)