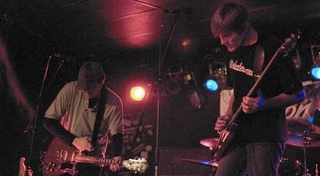 The Band…
VonDin is a Milwaukee based band made up of three extremely talented musicians rocking familiar local stages such as: The Main Stage, The Rave, Live, V'Nuk's Lounge, Linneman's, The Doctor' Office and John Henry's. The band has worked with several production companies including Royal Records, Gorilla Productions, Emergenza and Icon Entertainment.

When you go to a Von Din show, expect your adrenaline to flow, expect fist pumping, expect catchy and intriguing music.  Also expect a blog of reflective lyrics concerning life issues, introspection and the world, as we know it. When you hear Von Din don't expect all the songs to sound alike.  Von Din is a band with three excellent musicians whose personalities are as different as their diverse playing styles and repertoire; it is this diversity that creates the Von Din cornucopia of sound that often penetrates your mind and infects your soul.