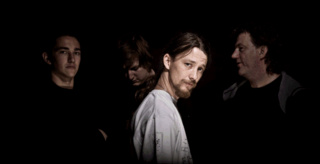 Waltz N Black is a four piece Rock/Funk band from Central Coast, New South Wales. They started in 2006 when Lead guitarist Matt Stalgis began a new group with bassist, Josh O’Brien, both ex members of “The Juicers.” During the first 5 to 6 months Matt and Josh spent time writing and composing while they searched for a drummer. This was a drawn out process, finding the “Perfect” drummer for Waltz N Black, but luck was with them, Matt’s Father mentioned drummer Grant Molloy. After one jam it was apparent that Grant was that drummer. Their final missing link was to find a new and notable vocalist.

Over the next few months they tried several vocalists, then, Grant rang Vocalist, Sean Thomson, who sung for a local band named “left undecided.” Lucky for Waltz N Black, Sean’s band had ended a few months before this and Sean was looking to join another local act. After the band members were appointed it was then that they chose Waltz N Black as their band name, a random choice that was inspired from a track title on a CD, a case of “close your eyes and point”, whichever name they pointed to would be their one of choice.

Since late 2007 Interstate work has been priority, recently performing at gigs in Canberra, Sydney, Melbourne, while also performing at local N.S.W venues. Waltz N Black drew ongoing response from fans calling for an Album, as well as gaining a new-found popularity at International level which has only been enhanced by their stable placement on the myspace charts with 3,000+ plays per day at their myspace site.

Finishing their recording for 13 track debut album in Melbourne June 2008, with launch tour planned to start in September 2008, New South Wales, then, Victoria, South Australia and Queensland. The Album titled “Fat Cats” is an album that has remained the core of who Waltz N Black are, and that is, an energetic act. If you hear it on the album, you will hear it live. An album with drive and dynamics, from one song to the next, a spirited and riff filled album.

From song to song, vocally, the presence of a chameleon graces the stage, Sean’s vocals alternate and shift with such colour and vibrancy. Pop slap sounds of the Bass Guitar that partition rock and Funk, to provide rhythm undertones that grace fans with funky sounds. Lead Guitar riffs that call to attention the Rock basis that make a band come to life, while also meeting the bass to compliment that true funky feel. Drums in Waltz N Black are crisp and punchy; solid beats with fancy fills, just where needed. Waltz n Black cater to solid and committed live performance that relate to people and is for the people. Waltz N Black remains a people’s band with their attention continually on the most significant of high end entertainment.