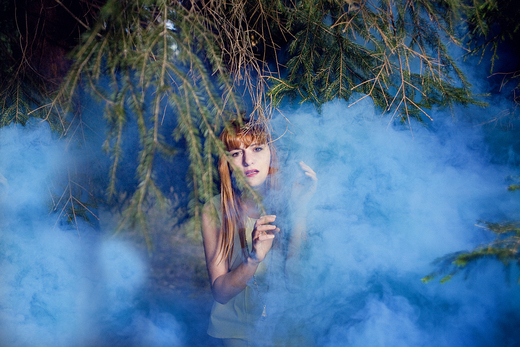 For a girl in her very early 20s, Ruth Koleva has gathered a noteworthy collection of music experience. It all started when she was about 9 years old and had to perform for a huge audience in Thailand. Eleven years down the line and numerous life-changing collaborations later (the brilliant Bobby McFerrin being one of them, yes), her first full-length album Within Whispers was born. And that’s just the short version of the story.

Obviously, for Ruth music isn’t just a hobby; it’s her way of life. By her 16s, she had already traveled to New York where her manager Joe Fletcher, manager and top concert promoter who has worked with a wide range of musicians such as Beyonce, BB King, James Brown and Tori Amos to name a few, lead her off to the recording studio with Martin Briley, the producer and song writer behind the gold record artists Elton John and Marc Anthony. Backed up by Bedbug Studio in Bulgaria, she scored her first hit single “Clean Your Heart” featuring the reggae lad Jammy Youth. At that point Ruth started picking up her own unique style. Pop opened up the way for new soul, and r’n’b made way for rhythmic funk.

Later on, Ruth was chosen among hundreds of candidates to spend five months in the capital of show business, Los Angeles, training at the Hollywood Pop Academy where she performed in front of the soul music pioneer Stevie Wonder. Back in Bulgaria, and loaded with experience and energy for new musical challenges, she joined her long friends’ hip hop label Illmate. The fruitful collaboration resulted in many performances around the country (they opened for Redman& Methodman, Kelly Rowland in front of 60000 people in Sofia), and made one colorful collective video which became #1 in all music charts in Bulgaria. In the meantime, she also managed to drop her soulful vocals on the fresh, jazzy beats delivered by the up-and-coming band Unlimited with which Ruth toured in Bulgaria and was a main act on both Spirit of Burgas and Park Live festivals. And Ruth was just 18 years old then.

It was not too long after she moved to the Netherlands to pursue university education when she met the talented exile drummer Soulization and stroke her first live performances in the low lands. The duo gradually enlarged and got sexier by adding the gentle sax of Jeff Hollie (Frank Zappa’s saxophonist), the throbbing bass of Steve Hartley and the smooth piano of Martin Denev. The prolific chemistry between them turned out to be so contagious that it spilled over many cities in the Netherlands and also around Germany and Belgium, the peak was at  the summer festival Spirit of Burgas.

All these happy encounters and rewarding collaborations climaxed in the release of Ruth’s debut album Within Whispers, which came out in April 2011. Certainly growing up along with the music of singers like Erykah Badu, Lauryn Hill, James Brown, and Jill Scott also breathed a jazzy flair into the soulful atmosphere of the album. Whatever the formula at the end, Within Whispers sounds like a mature love journey which blends passionate grooves and Ruth’s versatile voice into eclectic neo-soul nectar. And of course, lots of collaborations! Throughout her work, Ruth has always enjoyed working with various talents. Perhaps, having different artists contributing to the whole is what makes Within Whispers a dynamic listen with tracks ranging from the warm and undulating “4 Letter Word”, “Blizo” and “Zashto” to the faster-beat “You’re My” and “Fever”. Although some of the tracks are sung in Bulgarian, they all have a global appeal. The vibe is the message and lyrics simply complete the full circle. Two of the tracks, “Blizo” and “Zashto” (‘Close’ & ‘Why’ respectively in English) are complemented by visual presentations, which shows another side of Ruth’s devotion- films. By participating in the filming process, Ruth says she stays loyal to the personal message of the album tracks.

Ruth currently bounces back and forth between Bulgaria and the Netherlands balancing between her music career in both places, doing sold out shows and recording new stuff. Although she has already made quite a name for herself in her home country (becoming the youngest Woman Of The Year in 2010), she says she wants to advance her style beyond geographic borders, and to improvise, explore and collaborate with more international artists. But what is really up next for Ruth Koleva is a tricky question to answer. One thing is certain- she will not stop making music. 2012 has already a new EP and plenty of performances in store .