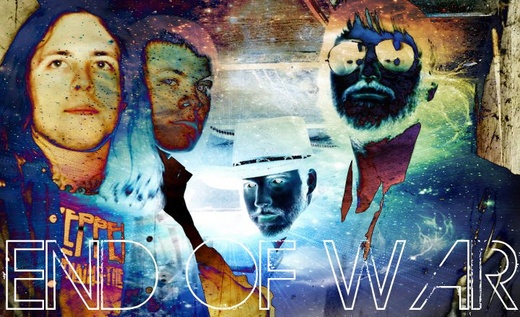 About End of War

If anyone had to try to grasp the sound of (The) End of War they would first have to imagine the members of Cream, Zeppelin, Hendrix and CCR getting together to create a mutant Frankenstein who in turn made a freakazoid love child with Nirvana, Pearl-jam and Sound-garden and the pixies. Thus the sound of (The) End of War is what results. Above all the resulting music is meant for people who like music that doesn't suck. Want more the singer Kevin Hart (Squibben) himself comes from the middle of nowhere, Desertland. Moving to Connecticut, he soon met Andy Tonn a farm-boy from an apple orchard and Patrick Huntley on the rails to nowhere at all. The group thus joined together inside a barn to create the sounds of war, THE END OF WAR. Later joined by Benjamin Dutkeiwicz the seal of rock had finally been solidified and the true sounds of THE END OF WAR had come to utmost fruition