« See all of Dreamscaper's Songs 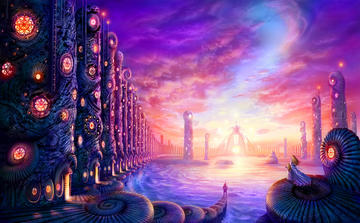 Have you ever wanted to have a fantasy that wasn't so long yet still very epic?
Uploaded: July 18, 2008
Duration: 3m 54s

Thanks! I'm glad you think it's great! I am working on an Ambient DnB style remix of this track and will be released in the next few months. It won't be as Gabber sounding nor will it have that Happy Hardcore silly sound to it like it did when it was really popular throughout the '90s but rather a smooth interlaced melody with supportive harmony locked with a tech-step beat and percussion with octave synths heavily layered throughout. I think it will sound even better than this one! Keep your ears tuned and your eyes out for this one. Thanks again!
by Stroberider on August 15, 2008 at 8:07 AM EDT

Oh ok, I had no idea that Space Planet was your old alias! I knew that it wasn't Aphex Twin or Orbital because it simply didn't fit their styles, and a fan posted a comment saying that this was by Space Planet. That actually makes a lot of sense, glad this got cleared up. Great track man!
by bingobongo on August 14, 2008 at 11:10 PM EDT

To answer the questions for those who question about this track being exclusively mine, no I am not Aphex Twin, no I am not Orbital, and no this track is not by either of them. It was originally called "Orbital Trance" by Space Planet, that being my old alias until Tunnel Recordings took it upon themselves to use it in their compilation disc Tunnel Trance Vol. 7 without my consent. I now go by Dreamscaper, previously Space Planet or DJ S.I. One and the new title of this track is called "Miniature Fantasy" since it was taken from me by Tunnel Recordings

Here's a couple of links for proof since I get so many people believing this misconception of it being by Orbital, Aphex Twin or any other artist..

This was a track I made back in 1998 under the alias Space Planet that was first released on Newgrounds.com and people were able to download it for free. Since I found that people were downloading it and trying to sell it either on i-tunes or some other sites with a different title, I removed it from the Newgrounds site. I've seen this track online titled as "Tunnel Trance" by Orbital or "Orbital Trance" by Aphex twin and if you look at both of these artists' discographies, there is no such titles nor styles that they create. They're both more Experimental with their music.

Hope this clears up any confusion.