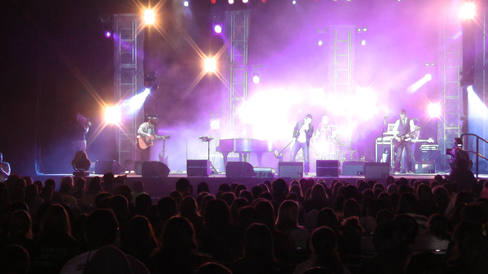 GOODNIGHT ARGENT combines the infectious melodies of a Top 40 Pop act, with the high energy live stage show of a well traveled rock band! Chase Manhattan, Jeff Stachofsky, Shane, Santanna, Evan Taylor, and Zac Burrell are what give Goodnight Argent their truly dynamic, breakthrough sound.  Their music has won Grand Prize at the John Lennon Songwriting Contest, and awards from the Billboard World Song Contest and ISC. The Goodnight Argent YouTube channel has generated over 1M views; while their music has been featured on MTV, Bravo, and Showtime.  In early 2013, the Washington natives kicked off the year with a 6 week, 7 state, 25 show tour throughout the west coast. Their tour was sponsored by AXS TV - the new music and entertainment network owned by Ryan Seacrest, Mark Cuban, AEG, and CAA. Goodnight Argent will be making various appearances on this national television network over the next several months.  The emerging Pop-Rock band will also be partnering with Logitech UE, to promote their expanding portfolio of digital music and consumer electronic devices. And if that weren't enough, one of Goodnight Argent's upcoming music videos will feature a guest appearance from the #1 Top 40 radio host in the US, Z100's Elvis Duran!