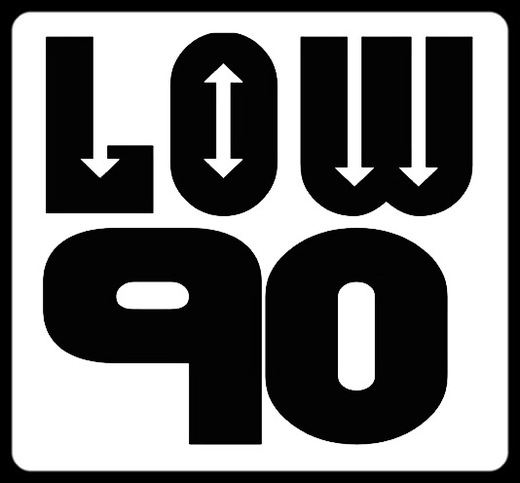 A new original band has emerged in Portland, Maine and begun to spread its wings.
They’re called LOW 90, and though they've been at it for some time -
the addition of Meredith Manning warrants the 'new' label.

The name 'LOW 90' isn't an aural report card on how they rate, or where they figure themselves into the current milieu either. It’s just that when they began it was in Andy Bogners’ basement, which happens to be at 90 Wayside Road in Portland, Maine.

In those days there were two, and when guitarist Bogner wasn’t busy at his day job he was twisting the knobs of his own musical machinery. Adding the more human element to the marriage was his partner and bassist, Jere Nickerson. They were aided in their venture by drummer Edward Cobb to round out the rhythm section with his well-placed thwack.

The band played the club circuit and recorded their self-titled 4 song EP with Jon Wyman in 2008. Soon after, Jere became ill with Lyme disease which halted any further live work. The band continued to write and record in Ed's home studio. It was with the addition of lead vocalist and lyricist, Meredith Manning in October 2011 that the 'new' LOW 90 became complete.

With the new line-up in place 'Spell it Out' came first, a relaxed yet rocking tune that established their new sound with the new line up. It was when they wrote this song that LOW 90 realized they had a different chemistry and were heading in a new direction. The decision was then made to scrap the catalog of songs written prior to Meredith and write all new material and basically re-invent themselves. Next came 'Dead Last', a more upbeat, straight-forward rocker. Since then the band has written eight more songs of different ilks to complete the set. Their sound is moody, sometimes dark - even atmospheric, with an edgy pop/rock foundation.

A year later, LOW 90 has reached their goal of writing all new material for their live show. All songs were written and demo'd in Ed's basement studio using what resources they had to document their songs. With their new sound, comparisons can be stretched from R.E.M., The Cure, to Kings of Leon and everything in between. However, LOW 90 has always kept the vision of being a live original band and is focusing more on writing and performing than recording.
This is what LOW 90 is all about:
Live music.