NEO GEO has been making waves since 2008 with their original and unpredictable brand of electro-tinged rock, described by Sugar Buzz Magazine as, “like Paramore, may remind you of No Doubt, with a touch of Evanescence and lots of EDGE and DRIVE.”

Following the incredible success of their 2010 warped tour, Neo Geo has signed on for 15 shows on the 2011 tour starting in Florida. They will be performing among bands like Black Veil Brides, Less Than Jake, and Yelawolf marking their second year in a row playing the festival-  http://vanswarpedtour.com/band/neo-geo. Their song, “Can’t Catch Me,” is to be featured on the Official 2011 Vans Warped Compilation CD.  NEOGEO are managed by Fletcher Dragge of Pennywise and Ken Seaton of Hardline Entertainment 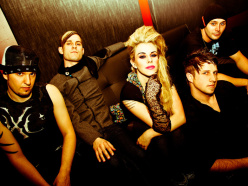