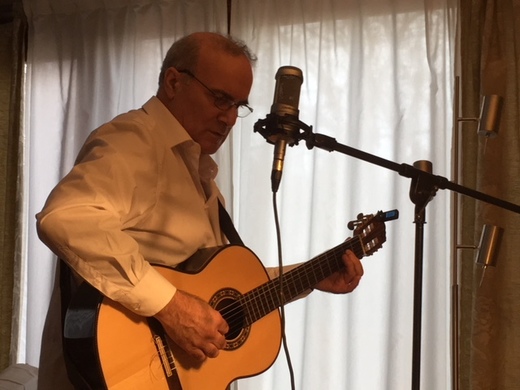 His 1st song; a collaborative work, was inspired by a poem written by Franka Gesualdi entitled "Broken Messiah" was
written in 1981,
I By 21, just months after writing his 1st song, he compiled 10 songs written in the styles of Leonard Cohen, Cat Stevens, Graig Lake, Gordon Lightfoot, Paul Simon; in other words the giants in the folk-pop-culture.
Ar 22nd year he made the acquaintance of a streetsinging songwriter _Michael Pietro
Who took him under his wing and helped to norture his desire to work on his craft.
In less than 3 years over 80 songs were writtenTo this day there are songs that he wrote in the early 80's that he loves to perform.

His whole approach to songwriting and performing is raw.
Time has not changed his way of doing things .
Till this day some songs seem just as fresh and effective as the first day written.

In 1983 he met and co-wrote with Jean Jacques Vergnaud, a reknowned multi-instrumentalist from France, opening his creativity to the world of jazz, jazz blues, and basa-novas.
In the same year he began working with Gerard Dube, pianist, composer, multi-instrumentalist and owner
of a recording studio in Montreal.
Their relationship spanned over 20 years and 10 songs co-written j.

1984 Michael married Manon Plouffe and in the same year became a proud father of his  daughter Marie Helene
who has the same talent. By the end of 1988, Michael had written appr 150 songs in many styles.

In 1993 Michael got back into songwriting after an absence of almost 5 years.
His desire to improve his craft, his singing,  never stopped.
He continues to be just as passioned about it as when he was in his twenties.

At 43 I began writing songs that are spiritual . Some songs are prayers. Some are conversations .
2006 was the year when he discovered internet streaming concert performances  and met Barbara Mullikin, Tina Guttery, Nancy Bauer, poets from America, with whom he co-wrote
several songs that are part of the CD A Saviour Like You  .

Michael continues to write till this day.