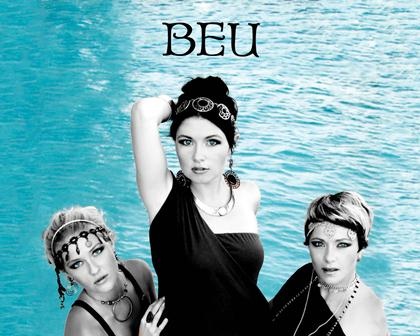 Our inspirations flow from the universal one song of LOVE. Through ingenuity, peace, and unity, we hope to heal lives and touch hearts joyfully with the gift of music.”

Born into a musical family, Candice, Christie and Danielle Beu learned from an early age to appreciate and understand all aspects of the entertainment industry. The sisters, encouraged by their parents, Broadway veterans (“A Chorus Line”), steadily developed their collective and individual talents.

In 1988, the Beu family (parents and eight siblings) left the bright lights of New York City for the serene sounds of New Smyrna Beach, Florida. By the end of the ‘90s, the parents divorced and the sisters unified through music, performing on stage with their mother, opening for major artists like Billy Ray Cyrus and Bo Diddley. They soon came to the attention of Award-Winning Songwriter Desmond Child (Kiss, Bon Jovi, Aerosmith). He introduced them to Record Producer Steve Greenberg (Joss Stone, Jonas Brothers) and the sisters became the second act signed to S-Curve Records.

In 2002, their debut album “Decisions” was released and received rave reviews. Billboard Magazine wrote, “While the environment for instantly accessible melodic music is often hostile at top 40 radio these days, one must remain optimistic that true talent will rise to the top. THE BEU SISTERS demonstrate enormous versatility on their upcoming, DECISIONS. All involved should pop the champagne cork for an effort that radiates joy, humor, passion, and artful, unaffected singing. These gals are simply wonderful.”

As singers and songwriters, the sisters soon garnered numerous movie and television soundtracks: (Double Platinum Selling) “The Lizzie McGuire Movie Soundtrack”; “Home on the Range”; “How to Lose a Guy in Ten Days”; “Because of Winn Dixie”; “Ella Enchanted”; “Smallville”; “Buffy the Vampire Slayer”; “Gilmore Girls”; and, “Charmed.” Quickly becoming a Disney fan favorite, the sisters were featured on “The Disney Channel,” Disney’s 50th Anniversary Celebration at the Hollywood Bowl, “Disneymania II In Concert” (hosted by Raven Simone), and a multitude of Disney albums. They then expanded their existing fan base by opening for “American Idol” Alums Kelly Clarkson and Clay Aiken on a 32-city tour.

It was at this point in their blossoming career that the tides shifted. The sisters were signed to an entertainment deal with Sony/Columbia Records, but delays led them, as a family, to the unanimous decision to return  home to their seaside town and release themselves of all contractual obligations. This process took time and the sisters soon found themselves waiting tables again, teaching vocal lessons, gardening, cleaning homes, and performing locally. However, during these lean times, they also found themselves putting down roots, growing families, and cultivating a new vision for their creative dream.

Today, the Beu Sisters are a self-contained trio, expressing a Pop/Urban sound that blends mystical melodies and affirmative recitations over neo-symphonic beats. The artistic rendering of the sisters’ orchestral, 3 part harmony creates the dynamic foundation of this unique and refreshing musical experience. The first single and video, ”Definition of a Lady,” captures their playful journey of self-expression and creative empowerment with elegance, grace and beu-ty.

On their own label, Beach Breakz Records, this Florida family has written, arranged, produced and recorded all songs from their upcoming compilation of 6 EP’s entitled A Collection of Beu-tiful Music. In this diverse collection, the Beu Sisters offer a variety of musical entrées to satisfy a variety of musical tastes.  In Beu-tiful: Vol. I, II, & III, the EPs appear in their original form, flavor and content (with original artwork by Danielle Beu). However, Beu-tiful InVersions: Vol. I, II, & III, offers a little something different for the gourmet listener. The “InVersions” deliver a palette cleanser to the heavy beats served on the original 3 EPs. In this edition, every track has been masterfully stripped to the bare essentials, revealing the intricacies of harmony, select instrumentation and lyrical content within.