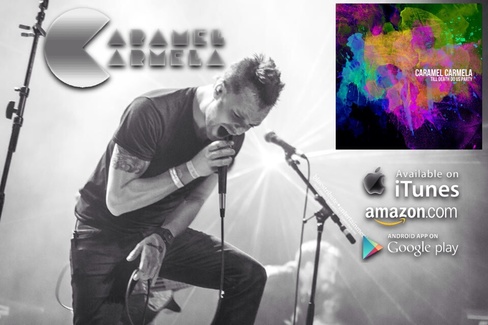 Caramel Carmela is an electronic/post-hardcore band that formed in Denver, CO in 2010. During that time, they completed their debut, full-length album, “Ominous Walrus” with producer James Egbert (Blood On The Dance Floor, Kill Paradise) and their music began to catch on as fans came in droves, giving them the ammunition to expand beyond their local audience to include touring the Southwest and Midwest regions. Their natural progression led them to their follow-up EP, titled “Skinny Jeans, Fat Bass”, which was written with the help of new guitarist Kyle Browning of Denver metal band, ‘Drop Dead, Gorgeous’.

In January of 2014, Caramel Carmela toured the Midwest on the way to record their second full-length album, titled “Till Death Do Us Party” with Grammy nominated producer, Matt Dalton at 37 Studios. (Joey Sturgis, Ma$e, Emmure, I See Stars) Till Death Do Us Party is available now.

All of Caramel Carmela’s releases are available at most digital storefronts, including iTunes and Amazon.

Caramel Carmela was chosen to play Denver Warped Tour in 2010 and 2012 among acts such as Of Mice & Men, Breathe Carolina and Taking Back Sunday. They played Global Dance Festival 2011 alongside artists such as Skrillex, LMFAO, and Kid Cudi. Caramel Carmela was chosen to open the Mountain dates of the Rock Yourself To Sleep tour with Dance Gavin Dance in 2012 and have opened for various touring bands, including Sleeping With Sirens and Finch. As well, Caramel Carmela has been featured in numerous magazines and reviews, online and in print.

Caramel Carmela is now working with Shawn Milke and 307 Artist Management based in Raleigh, NC. For business inquiries, contact shawn@307artistmanagement.com

You can listen to and/or purchase their music by logging onto the following websites: