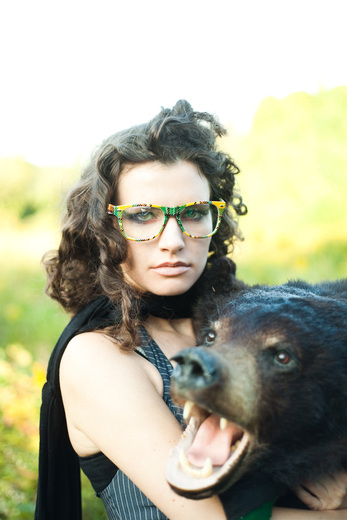 Ms. Bean was born in a tiny tiny town, just outside of Philadelphia, Pennsylvania. This town was home to a Gothic cathedral, a Medieval castle, a few European mansions, and a whole mess of forest and meadows. Carla Bean believes her imagination was allowed to thrive because of her unique up-bringing. The childhood hallucinations and night terrors probably didn’t hurt either. If you listen to her music, you’ll know, that whimsy and quirk are always essential ingredients.

Her mother, a creative writer and poet, and her father, a musician and visual artist, infused Bean with the bug for all things musical, artistic, and creative. She started playing her father’s various pianos, organs, Wurlitzer, accordions; and singing at the top of her lungs when she was supposed to be excited about dolls and Disney World. She was drawing twisted creatures in school, when she was supposed to be taking quizzes. Carla Bean got a disturbing amount of mileage out of the sticks and rocks that the woods provided her.

After years of being an essential ingredient in other bands, such as Fresh Cut Salads, Carla Bean teamed up with Producer and extraordinary musician, Rubin Edwards to take her own music to the next level. They have just given birth to Bean’s debut Album, “Mess of Things”