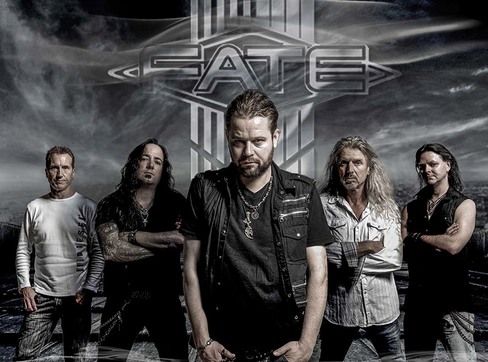 The legendary Danish Melodic Hard Rock band FATE, is celebrating their 30 years of melodic hard rock!  2015 will be a special year to see Fate live, as the band is planning to do an alternative playlist, every time they go on stage,  just to bring back as much of the history as possible, for the fans that have stayed along for the ride.

Following their impressive 2011 comeback “Ghosts From The Past”, which was very well received by reviewers and fans, the band released “If Not For The Devil” in 2013. It was mixed and mastered by Jacob Hansen (Pretty Maids, Volbeat, Amaranthe), with an even bigger success. Fans and press around the world, gave the band nothing less than a 5/5 rating for the album, and the band answered the call with their impressive energetic live shows, that leaves no one standing still!

FATE started their career back in 1984, when they managed to secure a record deal with the major label EMI, only a few months after they started rehearsing and recording. During the past 30 years, the band has released seven successful albums, including the “Best Of Fate – 25 Years” collection, and toured all over the world, as a headlining act, as well as support act, sharing the stage with bands such as: TNT, Pretty Maids, Mr. Big, Saga, Marillion, Cinderella, Tyketto, Alien, Return and Yngwie Malmsteen.

The current line-up of the band, got together in 2011. Since then, the activities in the band have picked up speed, with the guys touring Europe continuously, in support of “Ghosts From The Past”, an album that marked the start of a new era for the Scandinavians. The tracks on “If Not For The Devil” once again originated, from collaborative song writing, efforts of all band members, and the successfully combined melodic and catchy elements, from the AOR and Melodic Rock days of FATE, but this time with a more powerful and energetic Hard Rock and Melodic Metal sound.

If Not For The Devil 2013 / Avenue Of Allies / Rubicon Japan