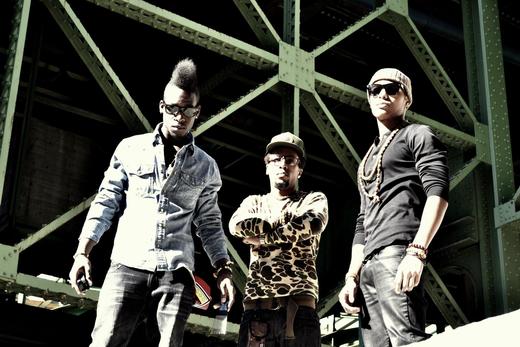 When you hear TNT you think explosive, dynamite and a big bang. With these three upcoming superstars they deliver a fresh style, unique lyrics, and the drive to make their success come to life. TNT is an upcoming Hip-Hop group from the streets of Brooklyn, NY. TNT consists of three members, Supreme, Skulli, and Freaky

Since 2010, TNT has been striving for excellence on their project “Before The Fame”, which was released on May, 24 2011.With their singles; Everywhere, Air Miles and Tonight, this young trio storms the streets of N.Y. with their revolutionary style. TNT has been spreading their style by performing their singles at, Night Clubs, Colleges, and Talent shows along with promoting on social networking websites, Blogs, and Internet Radio Stations. TNT is steady building a name for them selves, patiently waiting for their way into the Hip-Hop game.
The trio met in 2006 at E.N.Y Transit Tech High School, and then formed TNT in 2009 based on their common interest in music. Within their High School years, T.N.T released two mix tapes to expand their popularity for doing music. Through these mix tapes, TNT gained opportunities to work in several studios with different artists, producers, managing companies and A& R's which helped them grow as artists.
With their audience constantly growing, TNT is a name that has spread throughout Brooklyn’s diverse, music hungry communities. TNT’s musical ambitions continue to grow and they are already preparing their next mixtape, which is expected to be release in 2012. Their goal is to push hip-hop in a new direction, become the leaders of the new generation, and establish themselves in the music/entertainment world as a new breed of artists.