« See all of Maximus Parthas' Songs 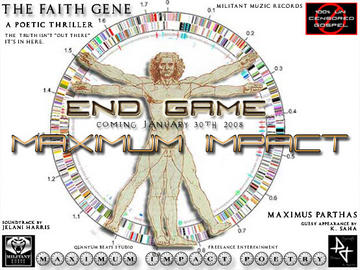 A Poetic Thriller based on hard science and startling truth. Be afraid. Be very afraid.

Comments for The FAITH Gene (A Poetic Thriller)

To see the video and more visi
www.whisperedwordspoetry.com/MaximumImpact-Topics-Faith-Gene.ht

An Answering machine tape
(Leave a message at the sound of the beep. Beep.

Hello? My name is Grigori
and I work for Celera as a research VP
Um, you don’t know me, but I got your number from (censored)
He said you’ve been enlightening many with your wor
and although politically charged, you’ve thus far eluded all the sensors
I’ve worked with Francis Collins at the NIH and I even helped design the holy GRAIL
They nicknamed me Sherlock G'nomes because when it came to finding gene
I've never ever failed
I’ve already become a non-person, so I doubt if you’ll find me.
But please, check my trail, check my tale
and see if there’s any truth behind me
In 1990 The DOE (Dept. of Energy) tried to sign m
to take part in the Human Genome Project before it became public via IPO
They expected major money flow and that the stock would privately go
to pharmaceutical corporations willing to invest upward in the tens of millions
And by 2010 every investor in Pharmacogenomics would win
by raking in many tens of billions
Corporate civilians
who would acquire the brunt of the world’s economic assets
And where the military has continually failed they would overwhelmingly prevail
by completely controlling the minds of the masses
It was part of the plan from day one
when the DOE invited me
to find the “Faith Gene.
And would pay ONE
HUNDRED MILLION DOLLARS
To whoever found it first
They needed not just a microbiologist/genealogis
But a genetic detective who didn’t mind a lot of dirt, and had a great thirst
to find the most important discovery since Genesis
A “Faith Gene” that would place the power of God directly in the hands of the nemesis
Now remember this
in case you think this has gone overboard or way too far
There’s a gene that dictates everything you think, say, do, and are
By far the single greatest influence in everyone on this planet’s life
Experience may make a difference and some small chang
but you would still be pretty much the sam
if you could live your whole life twice
Let me give you this link while I’m on the phon
it’s the list of selected traits and disorders associated with a single chromosome
You won’t find the “Faith Gene” on the Gene lis
but its patent is US Patenet#6661B4U XY34
and the synthetic RNA of the nematode worm is what made it all finally come true
One parasite giving another the total power to control everyone alive, including you
Think about what it can do.
Everything you believe is based on faith
That the seasons will come, that your daily bus will ru
and that the sun will shine down on your face
It’s all based on faith
The predominant power from the universe’s beginning till its end
For NO THING exists unless it exists first in the mind of God and men
Yes, the tree makes a sounds when no ones ther
But you won’t believe i
If you don’t conceive i
Even if you’re standing right there where you could hear
Of this be aware
The Faith Gene HAS been discovered and I’m the person who found it
You must believe that I’m sincere and that all my fears are grounded
Founded on pure truth I’m willing to let loose through your us
of linguistic adaptation
I implore you to spread it across the nation
that devastation is waiting at your doorsteps like Ed MacMann with a million dollar sweepstake
Your mind is the entry form used in a way that’s been the nor
and your soul will be that thief’s keepsake
No more will they keep takin
everything that matters will have already been took
We’ll all be just a story of our former glor
and the Faith Gene will be the pen to write the book
Much, much worse than Al-Quida, they’ve already started the initial attack
I’ll tell you what it is, but first let me make you aware of a fact
US Patenet#6661B4U XY342 is highly manipulated through ELF wave
over frequencies of 8.69643 hertz played.
So in order to use it, they’ve put it in musi
and the songs are.. 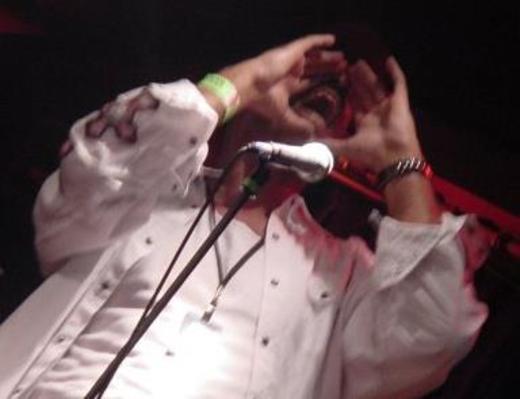