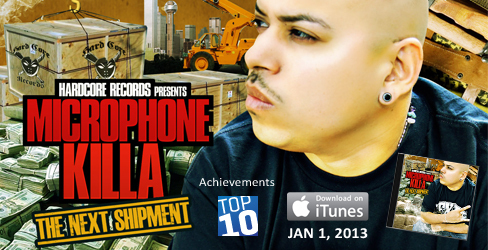 Jorge Ruiz A.K.A. "MK" Microphone Killa was born in Dallas, TX. He was raised in a neighborhood called Oak Cliff. He is the second oldest of 3 brothers and 3 sisters. His parents being from Mexico immigrated in the early 70's looking for a better life in the U.S. Rap music has always attracted MK ever since he was a young child.

Later on in his life MK found out he had a gift to write lyrics/music and at age 16 he and his older brother {formed a group called "A Touch of Latin"} with the help of Marcos B and DJ Tool, MK recorded a song called "Chicano Flavor".

The song won several MC battles in the DFW (Dallas Fort Worth) area, giving him local air play and his first interview.

Then as the years passed by he formed a group called Aztec Tribe.

As he got older the streets got hotter and more struggles got in the way, but with a lot of hard work and dedication he dropped his first album entitled "Controversial Background" with the hit single "Staying Aztec Tribe" featuring Marcus B. Then after that "The 13th Sign" with the hit single "Latinos" that gave him local airplay in the Texas area. Then the "We Don't Give A F***" album was released with lots of underground hits.

In 2003 he dropped his first solo album called "Mexican Gangsta Sh*t" which is now a classic in the south. What he would like to do is introduce a new sound to the world "A Dirty South Meskin Style". All of the albums have received tremendous feedback from the radio and the streets. Other albums released include: Mexican Gangsta Sh*t Part 2, The Journey to Azlan, 2012 The War of the Gods, Cumbia Tribal, MK was also featured on a worldwide compilation called “Texas Invasion” released by Hi Power Records and then the newest album titled "Neighborhood Supplier" released January 1st 2012.

MK started a new movement in 2009 called Cumbia Tribal that has gotten worldwide play in Latino clubs and stations. Projects also include the track “Mexican Revolution” which was featured on a worldwide compilation by Allen Dunn titled “Music for A Revolution”. The track “The Lost Message” was featured on a poetry compilation album titled “A Word to the Wise” by Moiko Records. Microphone Killa was quoted on USA Today stating "We construct your schools. We cook your food," rapper Jorge Ruiz said after performing at a Dallas rally that drew 1,500. "We are the motor of this nation, but people don't see us. Blacks and whites, they had their revolution. They had their Martin Luther King. Now it is time for us." Microphone Killa has also toured Mexico receiving airplay and radio station interviews.