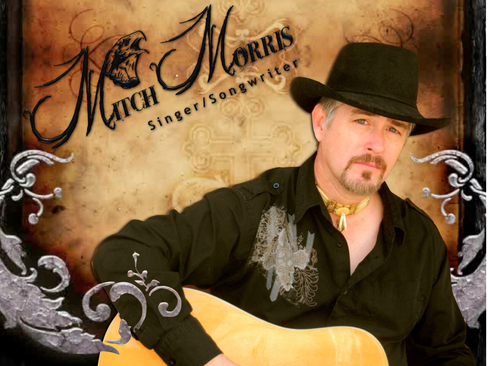 "WHO?
Mitch Morris is a tried and true Country singer/songwriter. He has placed songs with major artists since the 1980's. His voice is hard Honky Tonk with a touch of smooth whiskey

Drawing on his own experience and being a 'mental voyeur', Mitch has been composing songs most of his life. His material was used by Waylon Jennings in the 1980's (4 cuts). In 1999, his song 'I've Been Saved' was recorded by Joe Ables and went to #19 on the European Christian Charts. He is currently co-writing material for Them Morris Boys, proving his lyrics are ageless

Mitch started playing the guitar at the age of 14 years old. He was involved in school & church chorus and symphonic & marching bands. Over the years, he has been involved in school & college plays and community theatre in such productions as: Lil’ Abner and Sugar (showing off his clogging talents as well), South Pacific, Once Upon A Mattress, and Music Man. Teaching clogging & square dancing in the Southeast is also in the list of his accomplishments. From 1978 to 1982, Mitch was the youngest licensed square dance caller in the state of Georgia.

Mitch attended Belmont University in Nashville, TN, in the early 80‘s, and majored in Music AND Music Business. After being at Belmont, Mitch married Michelle Dearing and they sang together when ever they could. Together they raised their 7 children who are ALL also musicians and are expanding their careers in music. Music is not just a part of the lives of Mitch and his family, music is their life!

Mitch has worked and served in a variety of positions in his music career which include singing at local venues & fairs, revivals & churches as worship pastor., and teaching music & guitar. In 1987, Mitch placed 2nd to the John Berry Band in the Marlboro Country Music Talent Roundup. No matter what venue or where he is, music is always at the forefront.

He is the owner of Cherokee Rose Music Publishers,ASCAP.