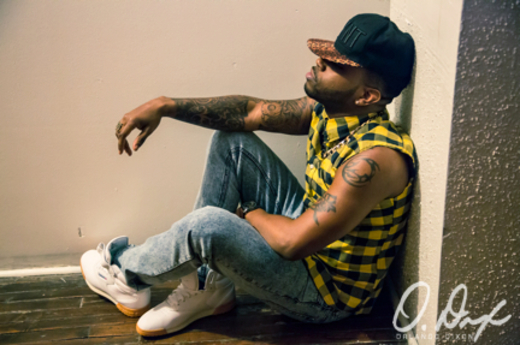 In an industry motivated by gimmicks and commercialism, R&B singer/songwriter Orlando Dixon and his management and production teams are challenging the status quo. Born and raised in the Washington, D.C. area, one of Orlando’s musical goals is to become an industry partner in elevating the music of his generation to a standard where it is relatable, celebrates

longevity and embodies substance. A classically trained vocalist and self-taught pianist, his style spans different genres and mirrors such legendary artists as Donny Hathaway, Sam Cooke and John Lennon. Yet by fusing his own artistry and creativity, Orlando continually produces a distinct sound all his own. He currently promotes his music heavily on his website, SoundCloud, and YouTube channel, yielding more than 3 million views and

Orlando has celebrated several accomplishments throughout his career. His most recent achievement being chosen as a contestant on Season 4 of NBC TV’s vocal competition The Voice; where he was a member of both Team Usher and Team Adam, moving forward one battle shy of the live playoffs. He has received various accolades including being among ReverbNation’s Top 50 R&B/Soul artists in the Washington DC metropolitan area, winner of

Disc Makers’ Design Studio Album Cover Search Contest, and a finalist in VH1’s Songwriting of the Year Contest. Orlando’s accomplishments also include sharing the stage with such renowned artists as Lalah Hathaway, Paula Cole, and Philip Bailey (Earth Wind and Fire); in addition to an honorary performance for Motown legend, Smokey Robinson.

Following his appearance on The Voice, the Berklee College of Music alumni immediately returned to the pursuit and cultivation of his career as a credible artist and songwriter with renewed focus and direction. When Orlando showcases his unique vocal abilities and songwriting talents through self-composed arrangements, he hopes to give his listeners a glimpse into just who he is.

“The point I don’t want people to miss with my music is its timeless distinction. My goal isn’t just making a hit record, but also building a legacy.”

Assuming multiple roles both in the forefront and behind the scenes, Orlando’s commitment and dedication to music creation is evident. As a vocal producer, he showcased his talent on Gospel Artist Juanita Bynum’s single “Soul Cry” (2010), which later hit #1 on Billboard’s Gospel Chart. His songwriting skills allowed him the opportunity to write songs for such

artists as Regina Belle and Chris Walker (Pendulum Records, LLC), resulting in Walker’s single “Everyday Woman” (2011) which peaked at #17 on Billboard’s Urban AC chart, and #64 on the R&B/Hip Hop charts at its release.

Orlando currently lends his vocal talents as background vocalist for R&B Artist K. Michelle, and performs alongside Grammy & Oscar Award-winning songstress, Regina Belle. As a recipent of the 2014 House Artist Grant, Orlando is currently preparing to record and release his first full-length album.  He continues to stay focused and motivated to accomplish the goal of solidifying his place in the music industry.