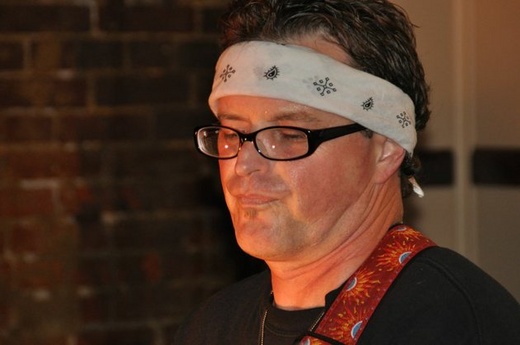 ok, about me, about me...ummm, let's see, my favorite color is Emerald Green, I'm afraid of bees, I like to open all my doors and windows when it rains really hard, and I'm convinced that I was born a decade and a half too late. I've been playing guitar since I was 5 years old and writing songs since I was 9

For the last 19 years I've been a "professional" musician which is the ABSOLUTE COOLEST job in the world. No other job in the world, that I can think of anyway, would actually encourage me to stay up all night drinking coffee, smoking cigarettes, reading books, and writing music - unlessssssss, I was the midnight shift person who proofread all the pamphlets that needed to be turned into jingles for the R.J. Reynold's Corporation. I suppose just about anybody "could" do what I do but some of them might not want to. Weird hours out of the loop of the "sun people" makes for a lot of solitude but you get used to it

I've released 5 Independent CD's and recorded maybe 80-some songs. There's about 2 and a half albums of music that hasn't been released yet and another 2 and half albums that hasn't even made it to tape yet. I can't keep up with it. I guess I like it like that. I mean, I'd hate to have a bunch of money to record with and not enough material, ya know? That would suck

I write in a bunch of different genres of music which, as we all know, is an A&R person's DREAM, right? They hate me. Which is ok, I'm not particularly fond of them either. :) I kid you, I'm a kidder! I can go from some angst ridden punk dittie where I'm screaming my guts out to a pretty little acoustic ballad complete with beautiful melody and weepie, whiny vocals. I mean, come on man, we're complex creatures and we've all felt a huge spectrum of emotions and what IS music if not a way to transfer all that stuff - from me to you. For me, I guess, it's always been the only therapy I could afford

I live in Savannah, GA right now with my uncle, David Flannery. We have an acoustic duo called Sullivan Street. We play Brittany Spears covers on ukelele and harp. :) I kid you, I'm a kidder

Did I mention that I hate "About Me" sections on these websites? No? Well, I do. I guess that's something else "about me" that you should know, huh? Ok, that's enough already. If you're still here you obviously have an attention span that far exceeds mine...let me know what you think of the songs, unlesssssss, you think they suck! Another thing "about me" that you should know is that I don't handle rejection well... :