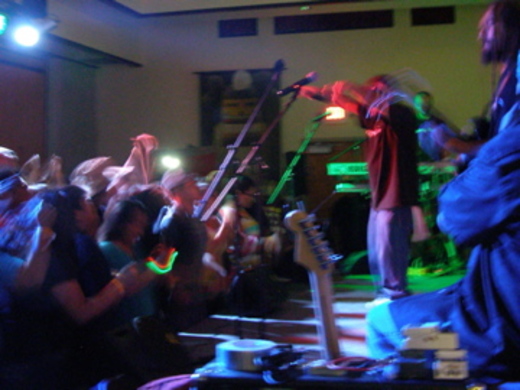 Two time Grammy nominated singer/bass/guitar Josh David Barrett's musical journeys carried him from "churchical" upbringings to performing with today's artists. His musical works have spanned over 20 years. Since 2015, he has worked as a member of The Wailers and on countless projects with various members of the legendary reggae band. Josh is of Jamaican ascent, Josh was blessed to have exposure to many other musicians hailing from the Union County, NJ are where he grew up such as George Clinton and the Parliament Funkadelic.

Before joining the Wailers, his extensive experience as a bassist and producer led him to work with many gospel greats such as Bishop George Searight and Royal Priesthood, Tramaine Hawkins, Kim Burrell, Donovan Jackson & Joshua Generation, and many others.

Most recently Josh has also been working with A1 Reggae Band, based in southern Arizona.

Josh continues to inspire with energetic performances, no matter what stage he is on. His mission remains steadfast in spreading the message of true "Livity" in the name of Emperor Halie Selassie I, JAH Rastafari.

Jared is originally from Teaneck, NJ and went to high school there in a very multi-cultural community and was exposed to reggae and Rastafarian culture at a young age. He comes from a very musical family- his grandfather was a professional trumpet player and also his uncle was a professional clarinet player and producer who worked closely with Richie Havens and many other famous musicians. His father played in an accordion band and his mother plays piano and guitar.  Jared started taking piano lessons at 4 years old and began playing Trumpet and French Horn at the age of 9. Jared played French Horn in the University of Arizona Wind Symphony. While in college, he connected with William Banks, Ira Osbourne, Danny Clarke, and other member of One Blood Reggae Band. Later, in NJ he played in a reggae band called Smoke that was signed to a local booking agency and did shows at the Borgotta, Jenkinson's, Willy McBride's and other large venues in NJ. A1 is also a studio label and in the studio, Jared has collaborated with Lupa, Norris Man, Lady G, General Smiley, Planet Jam, Danny Clarke, Daddy One Blood, William Banks, Junior Jazz, Shem's Disciples, Mahwga Lion, King Konan, Commissioner D, Jamie Cirrito, Muziah, Fire B, Crossbreed, and many others. As a keyboard player, he has backed Frankie Paul, Sister Carol, Danny Clarke, Carl Meeks, Casper, General Smiley, JAH Levi, Tony Culture, most recently Josh David Barrett, and many others.