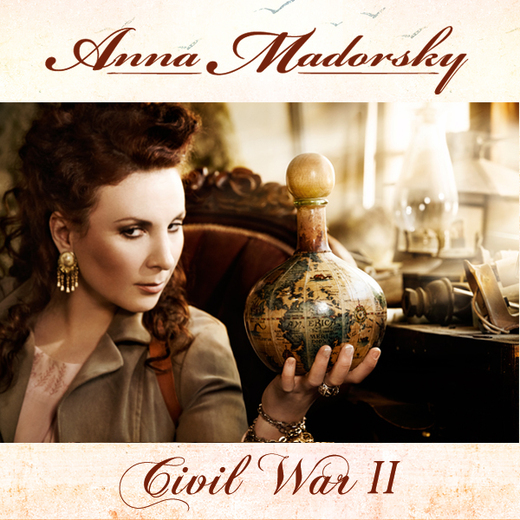 Two studio recordings into her career (and a third on its way) and singer-songwriter/performer and producer Anna Madorsky shows no signs of a waning momentum.

Now in 2010, Madorsky brings us Talk is Cheap, a record written and initially conceived in 2007 and inspirited by the aftermath of the disintegration of a relationship. Self-described as a “dark, personal, narrative work written fast and furiously” in a genre she calls ‘dream punk’,” Talk is Cheap is as one rock journalist called it, “stunning indie-pop, a catalog of songs that artfully analyze the miscommunications that happen in life.” True to all these descriptions, Talk is Cheap opens with the title track, a spirited, punk-pop call to putting your money where your mouth is. Led by Madorsky’s plucky, inimitable voice and buoyed by a lead guitar line reminiscent of the noise-pop of the Pixies, the song sets a candid tone to a style of songwriting and lyrics that could almost be read as both a personal and social critique of how we interact and communicate with one another.

From the shoegaze and indie-rock influences heard on Bad Fairy, Lazy Heart, and I’ve Got One, to the lilting dream pop of Evidence of Me that culminates in a bed of nearly 30 vocal tracks sung by Madorsky to create what she calls her “Beach Boys Cocteau Twins extravaganza”, to the kinetic, moody piano rock of “Marking Time” that begins deceptively with dulcet vocals and a B3 organ, to the electronica influences on Verb, to the ache of the solo piano and vocal of Reinforcements occasionally punctuated with an Enya-like chorus of vocals, the soundscapes and musical arrangements on Talk is Cheap explore these central themes of communication and dissolution of relationship with an emotional immediacy and unlabored expressiveness that allows it to both be an inspired, stirring, and evocative rock record and saying what it has to say well. Talk may be cheap, but Madorsky delivers.

“In the time I spent reflecting on why I had allowed a lack of honest communication to dominate my most intimate relationships, I saw a lot of parallels to how groups of people allow -isms and broad blanket stereotypes to really prevent true mutual respect and understanding within a society. Whether it’s in our bedrooms or on talk radio, the dysfunctional script is this...I’m waiting for you to shut up so that I can get my words in and hopefully say something clever enough to solidify why I’m more right than you. It stops being constructive dialogue and just disintegrates into divisive tribalism; you versus me, us versus them. We talk a lot, but never say the really important things. It’s absurd.”

In 2009, she brought us Incantation, and rather than center the themes around herself as protagonist, she created a variety of unique characters who are tackling all sorts of issues—many connected to the social issues, like the troubled economy and gay rights—that define some of the uncertainty we face in our own lives.

“Incantation evolved into a series of characters and situations that explore how people respond to external disappointments in their lives. The spectrum of attitudes people embody intrigued me more and more, until each one completely absorbed the point of view of each song and pushed me out of the way, sometimes altogether. The songs themselves may live in very different worlds both thematically and sonically, but their characters share the predicament of not having an outlet or place to come to terms with their confusion or emotions, or even to just vent and receive encouragement or direction. They are largely dealing with their individual struggle on their own, and ultimately the goal of the record is to give voices to these characters and points of view.”

While her blend of sharp wit, honesty and dark humor will have listeners focused on the lyrics, Incantation’s unique and varied musical style—which blends ethereal, ambient textures with catchy grooves and an exciting mix of electronica, guitar, synths, and keyboards including classic retro instruments like Fender Rhodes and Hammond B-3 organ—is equally compelling.

“On Incantation, the characters made it clear what musical style they were best represented by. Whether they are dream pop, 80’s-inspired dance pop, jazz, post-punk rock, or a hybrid of some sort, ultimately, my job is to be committed to the songs and characters, not to any specific genre or definition of me.”

Born in St. Petersburg, Russia into a Russian-Jewish family and growing up in Houston, Texas and East Tennessee, Madorsky’s background gave her a very unique musical and cultural upbringing that began with classical and Russian folk music; she remembers singing Russian folk songs at 5 and took classical piano lessons as a child. She loved listening to pop radio as a kid but there wasn’t a lot of room for creativity and individuality in her regimented, conservative family, despite coming from a family steeped in music. Having graduated from high school at 15 after skipping several grades and struggling with the expectations of her family, Madorsky was the proverbial “kettle about to boil over” for years until she put a classified ad out to form a band in her late teens while attending university. While the band experiences themselves did not materialize, they solidified her ultimate calling. Her ongoing passion for musical self-discovery led her to live everywhere from Austin, Texas (where she eventually got a regular gig at the Room 710 club, playing her self-penned and occasional unpredictable cover songs) to Long Beach, California, to Seattle, and currently resides in Los Angeles. Regardless of city, she has remained committed to steeping herself in making music, songwriting and performing.

Currently, Madorsky is playing shows at L.A. venues such as The Viper Room, putting out unique interpretations of cover song requests and challenges on her YouTube channel, and continuing to get exposure from music outlets like CMJ, Indie Radio 101, Women’s Radio, Rockwired Magazine, and Laserdog’s Music Hour. Stay tuned.