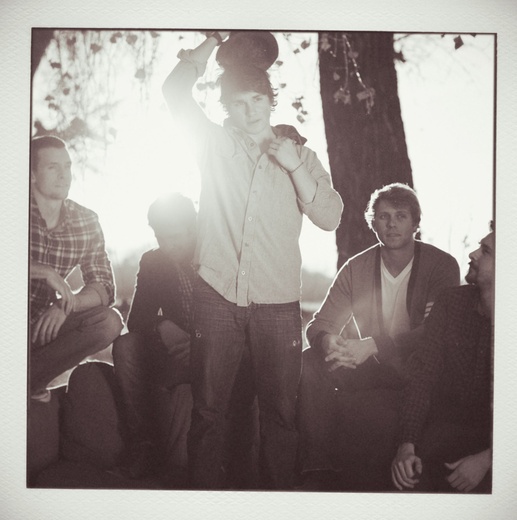 Don’t let their young age fool you, Asper Kourt turns out tunes and draws in fans with the experience of any seasoned indie act. Call us scene teens, but we’re just suckers for a garage band story, and Asper Kourt serves up exactly that. High school pals Kevin Herig (Lead Vocals, Guitar), Nate Boitano (Lead Guitar) and Heath Warren (Drums) started up in a garage on a street called Asper Court, which would later become the band’s namesake. What initially started as afternoon jam sessions soon grew into strong and passionate musicians recognizing talents in each other. Piano-playing Kurt Sorenson and bassist Kyle Ruggles sealed Asper Kourt’s lineup and laid back sound.

Asper Kourt serves up a lyrically poignant, sometimes folksy mix of pop and rock with a piano pop flare that lends itself to the easy-going charisma the band has cultivated for itself. Since their inception in 2007, they have shared the stage with acts including Five For Fighting, Uncle Kracker, Barcelona, Steel Train, Lydia and Calexico, to name a few. Their latest album, The Air You Breath – EP, was recorded at Wiseman Studios in Seattle and produced by Barcelona’s front man Brian Fennell. These recent efforts have gained them national attention, being named MTV’s featured band on Needle In The Haystack as well as finishing 1st place in Ourstage's 'Subway Fresh Artist Contest' to open for the Goo Goo Dolls. Also, ‘Take Me’ and “Firefly’ were selected to be played on the in-flight radio by both Delta and American Airlines.

Look for them to be on the road in February and March of this year, taking off on their first extended tour. Check them out at www.asperkourt.com.