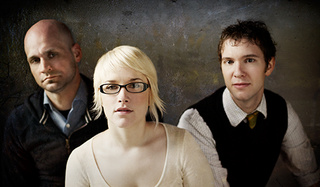 If you haven't heard about these guys, I have feeling you're going to hear a lot more.
-IndieFeed

…a necessary addition to any music library…
iTunes

…a slick indie-pop unit with heartache on the brain and Munoz's compelling coo front and center…
The Onion A.V. Club

Playing progressive and accessible indie rock, Aviette is Minneapolis-based band made up of Holly Muñoz (guitar/vocals), Justin Hartke (bass), and Kyle Larson (drums). Their debut record, Until We Hear From Dave was selected as one of the best records of 2006 by The Onion A.V. Club and was CMJ’s #18 ADD. Songs from UWHFD were featured on IndieFeed and charted at core radio stations such as KALX, WRSU and WTCC.

Aviette recorded their second full-length album, The Way We Met with Minneapolis-based producer Darren Jackson (Kid Dakota, The Hopefuls, Alva Star). From the driving beat of “What You Want Me To Say” to the determined optimism of “The Way We Met,” this collection of songs is consistent and thoughtfully arranged.

The Way We Met was released nationwide on July 1, 2008. Aviette celebrated their record release at the Triple Rock Social Club on June 28, 2008 with performances by The Alarmists, Kid Dakota and The Glad Version. This show was sponsored by 89.3 The Current (MPR) and Surly Brewing.