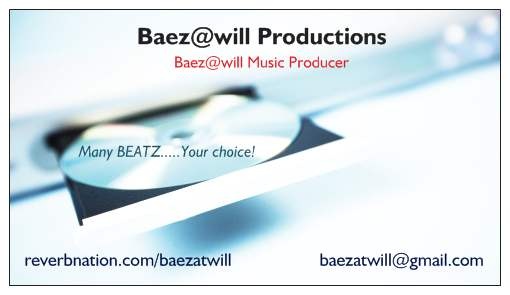 PRODUCER COMPOSER MIXER,PETE A.K.A BAEZ@WILL born in Dade County, Miami his family moved to Bushwick, NY in 1979 when he was only two months old. Growing up in the rough streets in Brooklyn, NY he ran into a lot of negativity. Maturing from all his past experiences, he became more involved in his latin roots and combining it with his rhapsody interest and music history, he decided that he was born to be a producer never forgetting his back round, he created BAEZ@WILL PRODUCTIONS. Specializing in creating and mixing his own beats etc. Also engaging his talented artists to know their value of talent, he promoted the productions to @WILL MOVEMENT giving them the opportunity to move forward with their dreams and educating them about the music business concept and dictating. "When their is a WILL theirs a WAY, we are all @WILL at the end of the day." From being able to study your appearance and coming up with a unique and accustomed beat to your liking this definitely WILL not be the end of what you hear and see. BAEZ@WILL PRODUCTIONS + @WILL MOVEMENT = FUTURE (YAL)