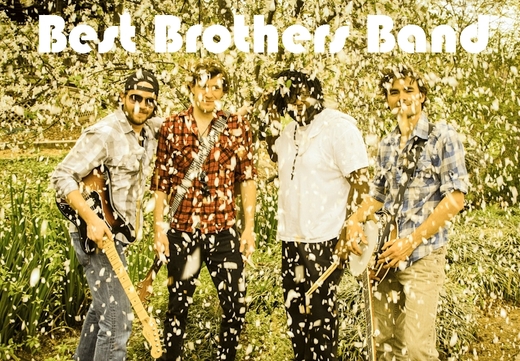 The Best Brothers journey began in the winter of 2009. After years of late night songwriting sessions, the BBB trio consisting of brothers John and Daniel and childhood friend Eric Sumner tried their hand in the Atlanta and growing Southeastern scene. “We had too many friends, family members, and one-night-fans who would end up at one of our increasingly popular jam sessions in my living room who simply demanded we set up shows for others to enjoy and party” remembers brother John. “We’ve been writing and playing songs as a group for fifteen years plus, since I was 12 first learning to play the piano side by side with Dan and with E on the acoustic or mandolin, but for some reason we just never dreamt of taking those creations on the road. It’s hard when your folks only allow you to listen to the Christian radio stations much less ever let you get out and see live music.” Looking back the brothers believe this is what has driven the incredible originality of the band. Daniel recalls “our oldest brother BB would sneak us records’ of Lenny Kravitz, U2, Willie Nelson, Red Hot Chili Peppers, Bob Marley, the Beach Boys and Waylon Jennings and we would spin them over and over since that was all we had. So we ended up with hodge podge of sounds and never gravitated to one more than the other. We just like good music and we love singing harmonies to it.

The no-pressure late night sessions with just the trio and sit in drums and bass was fun while it lasted, but that all changed in early 2010 when BBB’s cousins in legendary bluegrass band Dread Clampitt asked the brothers to support them with their tour through Atlanta. After a sold out 300 person room and an unforgettable night of firsts, the stone got its push and has never stopped rollin’. BBB has since headlined nearly sold out rooms across Georgia and has opened for the likes of Marc Broussard, Bob Schneider, World Classic Rockers (former members of Steppenwolf, Journey, Lynard Skynyrd, Santana, Boston and Toto), Rusted Roots, Georgia Satellites, Nic Cowan, Elizabeth & The Catapult, Dread Clampitt and Company of Thieves

BBB released their second self titled EP on December 17, 2011 resulting in the boy’s first radio play on Atlanta’s own 99x with numerous plays. After years of juggling demanding day jobs, BBB decided to make 2012 their year with their fathers wisdom always ringing in their ears “pick one thing and do it well, whatever it is”. With over 75 originals crafted, BBB is currently hitting rooms hard around Georgia and the Southeast bringing their unique style combining rock, pop, country, and newgrass which can only be explained by seeing a live set and watching the ebbs and flows of the sound and resulting crowd reaction. The boys will bring a tear to your eyes with such introspective hits as “Give Me Love” and “Lovely Lady” off their recent release followed by whiskey shots shootin’ as they rock crowd favorite “Orangutan”. So make sure seeing these Southern boys is in your bucket before you have to say “I knew them when…”.