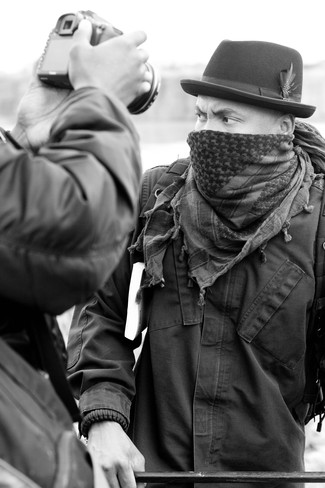 Da’Shade Moonbeam in his own words:

To say that I am simply a Poet or a Hip-Hop artist, would not be an accurate description as to what I do, or who I am. I choose to express myself through many artistic mediums, and I am constantly pushing the limits of these artistic forms to avoid categorization. But if I must classify myself, then I choose to be called, an Artist.

My mentors have always told me that I am so far ahead of my time that my work may not truly be appreciated by human beings, until we’ve mastered the science of Terraforming distant planets throughout the Universe. Life has taught me that a person can be many things, so I trek beyond conventional definitions of titles and boxes, to shed the spotlight on what I am, and where I am currently.

Da’Shade Moonbeam is; a Martial Artist, a Poet, an Emcee, an Actor, a Cinematographer, a Stage & Film Fight Choreographer, a Photographer, a Film Editor, a Script Writer, a Sketch Artists, a Teacher, a Mentor, a Sound Constructor, a Singer and a Warrior. This list is constantly expanding, and I may be one of these art forms more than the others, at any given time.

I am a self-proclaimed “Street Nerd” that has had a Love affair with the Martial Arts since the tender age of 7 years old. The Martial Arts were my first love, shortly after came Poetry, the Spoken Word, and Music in the form of Rap and Rock. I am a two-time National Poetry Slam finalist, and an internationally ranked Slam Poet. The subject matter covered throughout my collective catalog of work, include, but are not limited to: the on-going exploitation of women, men, and children through human-trafficking, slave labor, and sexual exploitation; love lost and obtained, happiness, the hood and Nerd-dom.

I continue the mission started by Blacklisted Individuals by making music to connect people, while still maintaining that Blacklisted brand of artistry that supporters the world over have come to respect and expect. The Da'Shade Moonbeam brand will be a breath of fresh air for Hip-Hop music and may bring some balance back to the scale. I believe that there is room for it all, but we are getting way too much music born from bottom line statistics and trending topics. I have said it before and will continue to do so until we get balance back. I am the change that I want to see, I am Working Class Muzik.

Most of the Body of work I am known for in the Hip-Hop community comes from the Southern Hip-Hop group Blacklisted Individuals. Blacklisted Individuals was created to make Hip-Hop Music without borders, and placed the responsibility of categorizing our sound on the listener. We considered ourselves to be bridge builders, and we used Hip-Hop Music as a tool to connect people.

Snyp (David Swan) and I formed Blacklisted Individuals in 2002 because we felt like no one was making music that was representing the common class, the working class. No one, not indie artists, not artists with label representation, no one in the Hip-Hop Music mainstream was speaking on the issues that those outside of wealth were dealing with. We felt like we had a responsibility to make the type of music we wanted to hear available to not only ourselves, but the globe. So we created “Working Class Muzik.”

Since the inception of Blacklisted Individuals in 2002, I have had the privilege of sharing stages with Hip-Hop Legends such as Snoop Dogg, The Game, Mike Jones, MC Ren of NWA, Mystik Journeymen, Gang Starr, the Ying Yang Twins, Talib Kweli, NOOK, Lil Troy, Mystikal, Trae tha Truth, Z-RO, Michael “5000” Watts and the late Hawk and Big Moe to name a few. We were finalist in major Hip-Hop competitions for The Source Magazine, Famecast.com, and Ourstage.com; we were also the first crew to be streamed live on PayPerViewHipHop.com.

Our song, “Dance Sucka!/I'M A DANCE” has received acclaim from MTV and is featured on the soundtrack to Craig Zobel's film “Compliance.”

I am in a head space that is ready to create something new for the world to experience. I see more Hip-Hop Theatre and storytelling through music, poetry, martial movement and multimedia in my very near future. I see myself sharing more work through Film, books and Photography. I see myself affiliated with a major company that thinks outside of the box when it comes to bringing art to the masses. I am moving everyday towards shaping the world I want see, as I see it, for the better. I am doing my part to heal the hood, for I am the hope that stands with in it.