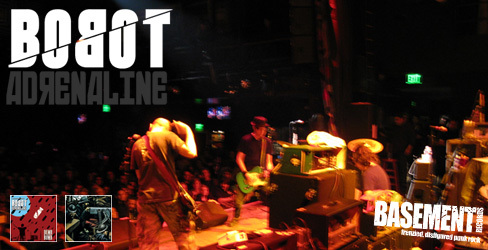 "another solid effort...Bobot is the very articulate mouthpiece for the disenfranchised. Striking a balance between melodic sway and roiling drums, I think this is their best work yet." -- RAZORCAKE

Bobot Adrenaline is a symptom of your environment, a product of this pre-fabricated social order. This complex punk trio is the 11th hour filibuster, the legitimate rebel yell that breaths in the air around you then blasts it back in your face with a torrent of amps, strings and discourse that will burn your lungs clean. Three figures carved from the City of Angels stake out their no spin zone each night releasing a hurricane of faith, anger and madness before a steadfast group of fans. Called punk, pop, reggae, gypsy, even ska, the power trio dodges traditional labels and acknowledges only that their music is the truth. Marching on their own orders in 2008, Bobot Adrenaline self-released their debut e.p. UNFURLED, produced by Tommy Stinson (The Replacements, Guns N Roses, Soul Asylum) and front man Pepper Berry, as well as additional tracks produced by Joey Santiago (The Pixies), a six song work that revels in rebellion, disgust, and betrayal at its most patriotic. In 2009, they signed to Basement Records and with producer Chuck Dietrich are set to release their follow up - a full length diatribe complete with new as well as unreleased songs that span the band's entire history. February 9th, 2010 will see the release of DUMB BOMB a scathing look at not just America or Obama's America, but ourselves. Listen for Bobot Adrenalines anti-death penalty anthem Penalty Box on Tony Hawks new game AMERICAN WASTELAND out now on Xbox and Playstation.