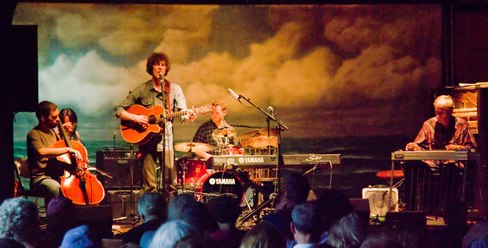 Without the Sound of Violence is a challenging record for challenging times. In Cameron’s own words, “this album is about the difficulty of learning about love without learning a lot about loss. All of the songs live in this tension and attempt to tell some of the human stories we either do not hear or simply do not want to talk about.” Sometimes ‘tongue and cheek’ and sometimes painfully intimate, Cameron is comfortable handling the seriousness of his new material. “I wrote and recorded this album extremely quickly; about 2 1/2 months from start to finish. It was a wonderful process because I didn’t question my instincts, over produce the arrangements or clean out any of the grit in the songwriting. It was all about relinquishing control and I found this very refreshing.” Blake wrote the songs in his new home after marrying and moving with his wife, Jill Collier Warne, to Michigan. “My whole life, including songwriting, has become so much more rich since marriage but finding a consistent time to write has been more difficult. I remember working on all of these songs very late at night, which gives this album a certain kind of mood.”

Without the Sound of Violence is a continuation of the lyrically rich storytelling of his sophomore release Hide and Go Seek (2010) but explores a wider range of musical genres including indie-rock, blues, country, folk and soul. “Because the backgrounds of the musicians I’ve played with through the years is so diverse, we were able to explore the many different kinds of music that we love while maintaining a sense of integrity and cohesion.” Blake brought together his long-time Baltimore based band consisting of Geoff Knorr (cello, electric guitar, bass), Dave Hadley (pedal steel, dobro) and Chris Pierorazio (drums), while adding musicians David Parker (electric guitar and bass), Ruby Fulton (accordion) and Ed Tetreault (Hammond B3). The result is a bigger and more intricate sound that is enhanced by the masterful engineering and co-production of Mobtown Studio’s owner Matthew Leffler-Schulman.

The album’s first single “People” is now available for listening on youtube. The record will be available this fall.