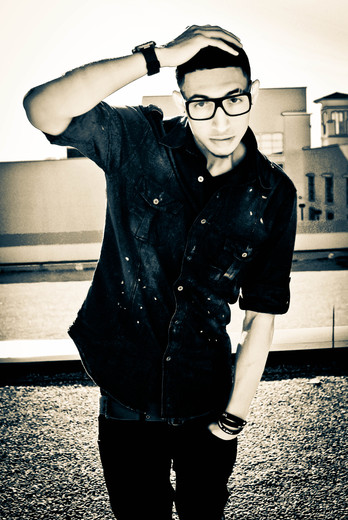 My name is Christopher Kenyatta Sivells. I was born in Salinas, California at noon, Pacific time, on the day of June 24, 1991. My father and mother, Leonard Sivells and Maria Peters, were both in the army at the time and stationed in California. After their divorce, around when I was three years old, my father moved to Virginia, while my mother and I moved to Grambling, Louisiana. While my mother finished her collegiate education at Grambling University, I began going to pre-school. This is where I found my love for music. I started to sing all around my apartment, in the shower, in my room, and outside while playing basketball. I truly became attached to it. Then, when I was six, my mother and I moved to Dallas, Texas. While living in Dallas, I started to sing in my local church's childrens choir. This is where I discovered the joy of performing and being on stage in front of others. I did this for about three years and even earned solos where I was able to sing by myself in front of a sanctuary filled with people. At the age of nine, I moved to Duncanville, Texas. Because it was a more urban environment, I developed stage-fright and nervousness when it came to singing in front of others. Ironically, what I did to compensate for my lack of performing was to start composing music. I began with rapping and then converted to writing RandB as well. One summer I even went to Virginia and recorded in a professional studio with my father. I then began to call myself Young Seville, since my father's artist-name was Seville. Around the time I was moving from Duncanville, at age 14, I started to allow people to hear songs I had written, as well as cd's I had made of my music. Soon enough, I had a pretty strong fanbase. I then took this fanbase to another level in Mckinney, Texas, which is where I began high school. People heard about me quickly. I constantly received calls about music collaborations and performing. It seemed like everything was opening up for me. Because of this, I felt the need for a new artist-name. I came up with "Kenille", by combining "Seville", from my dad's name, and "Kenyatta", my middle name. To me, Kenille sounded more professional and more serious to an audience. I started to use the tag "Kapital K" on every song I recorded from that point on. With this new name, I put out two self-distributed mixtapes right before coming to college. While working on my third mixtape, I met an individual by the name of Walter Moten II. He had a studio where I could go and record, for free, and I soon found out that he owned his own entertainment company by the name of Bank Life Entertainment. I worked hard to try and prove to him that his company could benefit from signing me, and after about a month Walter was convinced. In April of 2010 I became a professional musician. After signing a contract with Bank Life Entertainment, I released two mixtapes, "Industry Ain't Up To Par Vol. 1" and "Ying and Yang...Rap vs RandB". Also, under the label's contract, I have written an entire mixtape for another Bank Life Entertainment artist by the name of Kieda, which is entitled "The Yellow Brick Road". She was the first artist I wrote a full project for, but she will not be the last.

Now that I am back to being an Independent Artist, since I chose to not resign with Bank Life Entertainment after the ending of my contract's term, I am working on three new projects. First, "Out Shoppin (A Mixtape of Covers)" will be released, hopefully on 09.10.11. This will be the most heavily advertised mixtape of mine, up to date. Then, in the winter of 2011 I will release the second part in my two-part-series of mixtapes entitled "Getting Ready". These two mixtapes combined are being used to promote myself as an artist and to help market my EP that I will sell early Spring 2012. This be titled "The Interview". As you can see, it's basically a story being made throughout; I'm allowing my fans to grow with me. Only GOD knows what's in store for my future, but I know that HE s leading my path. Hopefully, I will be able to perform and travel internationally, as well as write for recording artists all over the industry.