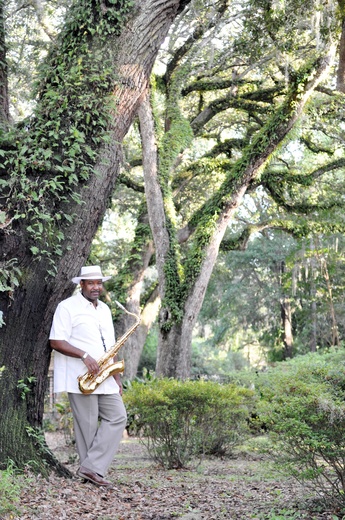 Truly living up to its provocative title, Hulon’s 2010 independently released debut First Impressions spent 15 weeks on the Billboard Jazz Chart (peaking at #25). Its debut single “Sax on the Beach” reached #16 on the SmoothJazz.com Top 50 Indie Chart and was featured on the noted jazz website AllAboutJazz.com, in addition to receiving national and international airplay at terrestrial and online radio. Collaborating once again with mentor, composer, producer and fellow saxophonist Jeff Kashiwa, the Panama City, Florida based tenor saxman gets even more personal and intimate with his growing audience on his highly anticipated, musically eclectic follow-up After Hours.

World renowned for his years with The Rippingtons, The Sax Pack and numerous hit solo albums over the past 20 years, Kashiwa again brought in some of contemporary jazz’s most powerful and dynamic players to take Hulon’s musical game on the new collection to the next level; Dave Hooper (drums), Allen Hinds (guitar), Melvin Davis (bass) and Bill Heller (keyboards) all played key roles as well on First Impressions.

The new 11 track set includes a vocal and instrumental version of the Heatwave classic “Always and Forever” and eight originals penned by Kashiwa that play to Hulon’s strengths as a soulful balladeer and a grooving R&B/funk player, with a few dashes of cool and swinging traditional jazz in the mix. Highlights include the sensual late night romance “You’re Beautiful,” the whimsical mid tempo light funk tune “Takin’ My Time,” the tropical chill of “Sticky Trickuation,” the sly, “Pink Panther”-esque “Speak Easy” (featuring shuffling drum, bass and finger snap rhythm) and the high octane horn-driven jam and first single from the new release,“Do You Feel Me.”

Yet there’s lot more to Hulon’s dynamic emergence onto the urban jazz scene than simple chart stats and the support of some of the genre’s best players. At its heart, it’s the story of a musical dream long deferred and unique connections between the spiritual and emotional healing power of music and the physical healing that Dr. Hulon E. Crayton does as a rheumatologist and founder of The Arthritis and Infusion Center, which specializes in the treatment of Rheumatological diseases as well as sports related injuries. The title of one of the tracks on After Hours, the tropical flavored groove tune, “Second Opinion” is a playful ode to his longtime profession.

Over the past few years, Hulon has experienced the unique double blessing of performing for some of his patients, feeling joy and fulfillment as those who once could not even walk actually got up and danced and sang along—all thanks to him! Hulon has been practicing since 1986 and is a diplomat of the American Board of Internal Medicine and of the American Board of Rheumatology. He has a Master’s in Hospital Administration and has served in the U.S. Army and the Army Reserve, obtaining the rank of Captain. In an effort to give back to the community, Hulon and his wife Dinah created the Crayton Foundation to assist in providing minorities with a feasible way to attain the funding needed to attend college; they have given numerous scholarships to students interested in pursuing a career in healthcare related fields. The foundation gave the first ever scholarship at Florida State University for African American students.

The Milwaukee born and raised Hulon was originally inspired to play the alto sax by his college roommate when he was an undergrad at Lincoln University in Missouri. He taught himself the instrument and it became a favorite hobby for a time, used as recreation and stress relief as Hulon played along to his favorite recordings. He put the horn aside for years as he went to medical school at the University of Wisconsin, started his first practice, got married and began raising a family. Hulon’s interest was rekindled when all three of his children showed an interest in music and served as first chair on their respective instruments in middle school. He had loaned his daughter his old sax and she wouldn’t give it back, so he bought a tenor at a local pawn shop (after moving to Florida) and that became his main voice as he began to pursue music professionally.

He started playing informally with some local musicians (enjoying cigars and martinis along the way) and then was hired to play at a festival by a promoter who heard him performing one Sunday at church; this prompted Hulon to start a band with a fellow doctor friend. Cleverly dubbing themselves On Call, the band began performing at numerous private functions, local Panama City jazz hotspots like the Boatyard, Firefly, Bonefish and large scale affairs at the Grand Panama Hotel. His incredible friendship and musical association with Jeff Kashiwa began when Hulon was in the audience at the Seabreeze Jazz Festival one year when the famed saxman was onstage playing the EWI, or Electronic Woodwind Instrument.

“He started introducing this cool looking instrument and I shouted out from the crowd that I’ve gotta get me one of those,” says Hulon. “Jeff responded from the stage, ‘Not only will I sell this to you, I will also teach you how to play it!’ After the show I met him and asked if he was serious. He gave me his address, I sent him a check and he sold me his EWI. He was down in Orlando with the Rippingtons two months later and I went to see him. He took me up to his hotel room and taught me how to play EWI. At a later gig in Atlanta, he invited me backstage to meet the Rippingtons. We started doing lessons on Skype, and about a year later, Jeff was playing at a fundraiser for the Anchorage Children’s Home, which takes care of disadvantaged youth, and my band opened for him. I was nervous at first but later in the show, when he invited me to play onstage with him and we traded solos while walking parallel up the aisle in the audience, I felt like this was a musical high I could get used to!”

Hulon’s later idea to hire the veteran saxman to compose a jingle for his practice inspired Kashiwa to write an extended version called “Dr. Goodfoot,” which ultimately became the first track they recorded on First Impressions. The title is a nod to James Brown’s classic “Get on the Good Foot.” Once Hulon received the blessing of his wife Dinah and the encouragement of his children, he enlisted Kashiwa to help him develop a full length album project—beginning with four demos that Kashiwa had sent him after “Dr. Goodfoot.” “The experience was surreal,” Hulon says, “as if I were suddenly on this fast track. A few years earlier, I wasn’t even playing the horn, and here I was in a studio recording with a world renowned saxophonist who believed in my potential as an artist. He saw something in me that I didn’t see in myself.

“Even as he was producing me,” he adds, “he was my teacher and mentor, telling me what I needed to do, helping make me a better player. The cool thing about Jeff is that he always has a goal for me inside his mind. He won’t always tell me what it is, but when I hit it, he tells me and then raising the bar. With constructive criticism, he knows how to get the best out of me. The experience became even more intense as we worked on After Hours. I am feeling more confident about myself as a player and artist than ever and am able to nail a song much faster. The first time we ever recorded, it took me eight hours to do the first song and four days to do three songs. This time we got almost the whole album done in three days—all thanks to Jeff’s encouragement and gentle push at the right times.”

Believing that “versatility is survivability,” Hulon (with Kashiwa’s guidance) breaks the mold of the typical urban jazz output these days by offering a wide variety of styles and grooves behind his rich emotional tenor melodies. That’s not surprising considering the wide variety of genres he listens to on his iPod—from hip hop and country to orchestral and classical music. Yet beyond simply providing musical pleasure to the genre’s adult audiences, he says, “I want to be inspiring to children and a good role model to them the way I have strived to be with my own kids. I’m really enjoying this journey every step of the way. As with medicine, I get great personal joy and satisfaction having people appreciate what I do. My time in the office is devoted to physical healing. But when I’m recording or playing live onstage, that’s when the spiritual healing begins.”