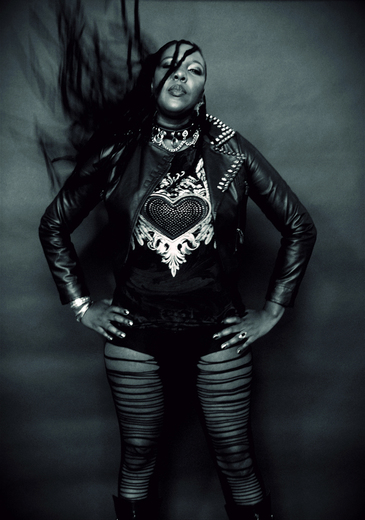 Imani Chyle is Takin' Over

If you're searching for the latest in hot and fresh artists, look no further, as Imani Chyle is about to explode onto the musical scene in a captivating, honest fashion sure to dazzle and entice fans everywhere. A veritable melting pot of musical styles such as hip hop, R&B, rock, and soul, this Atlanta based artist serves up a little something for everyone to enjoy. Backed by the prominent singles "Soul and Rock N Roll," and "Doin' It My Way," Chyle's solo debut, Out Da Box is nearly ready to drop, sure to infectiously spread throughout national airwaves.

Born and raised in Houston, Texas' fifth ward, Chyle survived on the street as a young mother for most of her teenage years. Her name defines the persona, representing faith and the elements which complete her consciousness, healing, perseverance, and love for Yah. Using music as a lifelong outlet, she honed her skills through endless writing and rap battles, under the name MC Bytch, eventually forming the group 2Aggrivated, and inking a deal with Profile Records by age 18. Live performances with hip hop acts such as DasEFX, The Geto Boys, and The Convicts vaulted the hardcore rap act into popularity, but their album was eventually scratched due to management and label difficulty.

Using her fascinating life story and years of industry experience, Imani Chyle is becoming a new voice for today's women; writing starkly real and inspired music capable of evoking everything from pain to joy. She ambitiously launched her own indie label, Mos Records as an outlet to release her music while retaining artistic integrity and control, which shines through in the bursting, appealing melodies running deep throughout Out Da Box. Co-Produced by noted Atlanta producers Monyae Crawford & Richard Rollie of Love Child Productions, Tokyo Disco Kid, Mali Boi & So For Real Productions, Imani Chyle assembled an all-star cast to create an ideal musical experience.

Influenced by everything from Marvin Gaye to Chaka Kahn, UGK to U2, Chyle devises songs with starkly relatable material, backed by well-crafted beats and harmonies. Reinforced with a four piece band, background singers, dancers and DJ, her live act lit the stage on fire with performances at Sweet Auburn Fest, Atlantis Music fest, Apache, The Atrium, among others. With limitless potential, Chyle designs her songs with universal appeal, and attempts to reach everyone through creative, genre blurring writing.
Out Da Box is already generating buzz and received high scores on sites such as Akon's Hit Lab and UPlaya.com captivating audiences as the record threatens to burst into popularity upon its release in June.
The album has received multiple Platinum Auddy Awards and high HSS scores; the song’s main score relates to its overall potential for commercial success and is recognized as such throughout the music industry. Songs from the album are available on her Reverb Nation page, and Chyle consistently updates her Twitter account with the latest news, so make sure you don't get left behind!