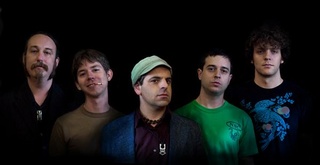 Jaik Miller Ban
JAIK MILLER BAND (JMB) started a couple years ago as something completely different. TRUStY(the original band name) played their first show at the NOLA Jazz and Heritage Festival in the spring of 2005. Guitarist and songwriter/singer Jaik Miller had a major presence in the 1990's New York rock scene. His genre defying band XANAX 25 (once dubbed "wusscore" by music journalist Neil Strauss) played with everyone from Son Volt and Me'Shell Nd'geocello to King Crimson and Dave Matthews Band. Jaik has written with Warren Haynes, Barry Reynolds, Oliver Ray [Patti Smith Band], Elijah Blue Allman's DEADSY and Sabina Sciubba [Brazilian Girls]; Original bassist was Optical Delusion founder Marco Ferrero, and with the help of his brother Michael Ferrero, the TRUStY shows put "Multimedia Visionary Folk" on the map, attracting the attention of artists such as Alex Grey and Luke Brown
In fall 2005 TRUStY did a short demo with Playmakers' Matt Stein (featuring guest appearances by Jonah Smith, JP Bowersock, Meghan Andrews and RAQ's Todd Stoops)and were quickly welcomed into the jamband scene sweeping North America, appearing at such notable events as the family dog tribute to Chet Helms in Golden Gate Park and AT40 (a part of the 2005 Vegoose festival in Las Vegas Nevada. ) TRUStY appeared on the USA network's MONK program in summer of 2006 and won a sponsorship from New England's award winning STONE COAST BREWING COMPANY, becoming the poster children for the SCBC's 420 IPA....upon going national, they learned of another band called Trusty and wore the short-lived moniker "Yama Bandit", playing at the world famous CBGB in the final weeks before it's closing

In the winter of 2006-07 the boys went to the Carriage House Studios in Stamford CT (the spot where records such as Pixies' "Doolittle" and Deftones' "Saturday Night Wrist" were made, as well as countless hit records by Diana Ross and Meatloaf among many other notable artists) with JP Bowersock (Strokes' "guru" and guitar player for Ryan Adams) in the producer chair. the album was recorded in an ol'skool rock 'n' roll style; many of the songs were captured live in the studio; "Furthermore" (a song Jaik attributes to the spirit of his friend and fellow songsmith, the late Chris Whitley) was recorded in mono, giving it an authentically gritty feel. the album is laced with unabashed homages to the boys' musical influences; from the pop-punk energy of "social disease" and "anything you don't want" to the psychedelic twang of "Orange Sunshine" which sounds like a lost track from the Grateful Dead's "American Beauty" sessions; from the Marley-esque "keep movin" to the straight ahead rock and roll of "4447" and "another good look"....the album's closer, a stripped-down take on their live powerhouse "There's a Whole World On Fire" has recently been included on "The Dream Is Valid"; Zaadz Visionary Music compilation volume one

Of JMB , Bowersock has said, "The band is talented, tight and able to walk the line between a rock band and a jam band in a way few are able to." the album was mixed by super genius android (and folk city alum) Mark Dann and is peppered with performances by Dann (upright bass) Uncle Earl's Kristen Andreassen (harmonica) and the vocals of rising star Meghan Andrews. After one more name change (to JAIK MILLER BAND), Jaik (gtr/vox), Marco (bass), Max Tucker (drums/vox), Garth MacAleavey (gtr/keys/vox) and new guitarist Bowersock (Wetlands vet and Miller's long time collaborator Craig Robison took over the bass duties in late summer of '07 ) had become a band. a group of individuals that behaved as a single organism..... it was time for JAIK MILLER BAND to start paying their dues