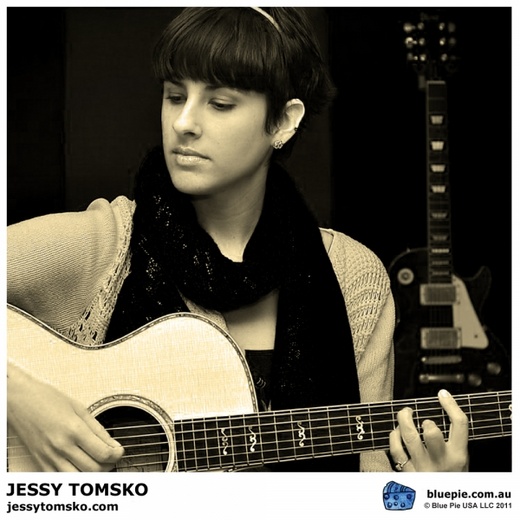 Hailing from New York City, Jessy Tomsko has a love for music that transcends the simple pop tunes that plague much of today’s music scene. With her heartfelt lyrics and self-penned melodies, Jessy celebrates life and love in her acoustic renditions brought to life on the many stages of New York City

Jessy’s love for music stretches back to early childhood where she became enamoured with writing short poems and stories, and shortly began to add music to the equation by composing little piano pieces. These early ventures into music cumulated in picking up the guitar in her late teens, and deciding then and there that she wanted to focus on music and pursue a career of her own. After some time spent earning a degree in classical singing, Jessy returned to writing music, reigning in her creative capabilities and challenging herself as a singer-song writer

In 2010, Jessy worked closely with Greg Fisher of Evolving Sound Studios on her debut, full-length album, “The Light You Make”. The album invites the listener to take part in Jessy’s honest and unguarded musical interpretation of life’s virtues and melancholies. The soft, lilting melodies featured on the record showcases her vocal skills, finessed with years of classical training

Jessy’s work is infused with a lightness and warmth that is equally embodied in her live performances. Maintaining a busy performance schedule, Jessy has played at venues such as The Bitter End in New York City and the World Café Live in Philadelphia, and major events as the Wave Gathering Music Festival in Asbury Park, New Jersey and the Launch Music Conference in Lancaster, Pennsylvania. She’s also had the honour of sharing the stage with artists such as David Berkeley, James Maddock, John Francis, Amber Rubarth and Ari Hest among many others

“Little Reverie”, a three track EP, was released in January 2011. Jessy continued to evoke emotionally charged responses from her listeners with acoustic tracks delivered with sweet and simple vocals. Her stripped down and honest delivery magnified the intimacy she strives to achieve with her audience

Jessy continues to grow as an artist, garnering new skills from each musical experience and being inspired by artists such as Joni Mitchell, Ani Difranco and Ingrid Michaelson. These experiences can be seen in her new full-length album, “Join the Circus”, to be released this year

Known for her well-crafted songs and dynamic stage personality, Jessy’s easy-going personality and warm vocals permeate her music and continues to do so with her latest single, “Come Get Me”. As a member of ASCAP, she has teamed up with Concerthouse Music Management and Blue Pie Records in 2011 to further develop her music