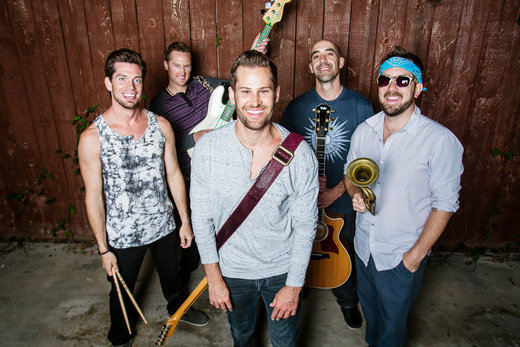 Hailing from sunny San Diego, Jet West is inspired by great waves, strong drinks, and tan women. This five piece band formed in the fall of 2008 as an independent, Rock/Reggae band and hasn’t slowed down since.

Jet West is lead vocalist/guitarist Scott Floquet, lead guitarist/vocalist Chris Warner, bassist/vocalist Deren Schneider, drummer, Derek Potter and Trumpet/Percussion, Jack Taylor. The band's varied musical style fuses traditional rock with elements of reggae and hard rock, a sound born from the beaches of LA and San Diego. The group as a whole emits the laid back California vibe that demands a beer in the hand and a steady beating head.


Whether thumping from a car, hitting hard in some ear-buds or blaring loudly to a massive energetic crowd, Jet West will introduce your ears to a unique blend of music that will put you in a good mood anywhere, anytime

If the live show is the main course, Jet West is pleasantly full. They attribute their motivation, discipline, and musical growth to their die-hard fans who go to great lengths to be part of the Jet West music scene. With a never ending goal to engage and captivate each person in the crowd, Jet West strives to move the floor from underneath their fans’ feet and engage them to become one with the music.

In 2010, Jet West released their first full length album, “Dropping In” on their independent label, Hidden Reef Records, and a musical journey around the nation was spawned. Their debut album was nominated in the San Diego Music Awards for best new World Music Album 2011. Jet West has shared the stage with such big names as Slightly Stoopid, Authority Zero, The Aggrolites and Tomorrows Bad Seeds

With music that touches on societal pressures, sexual conquests, partying, relationships and their love for the beach, Jet West has what it is you are looking for that harmonious sound that makes you want to take a long drive, drop in an overhead wave, lose yourself in the moment with another soul, or simply kick it on the porch.