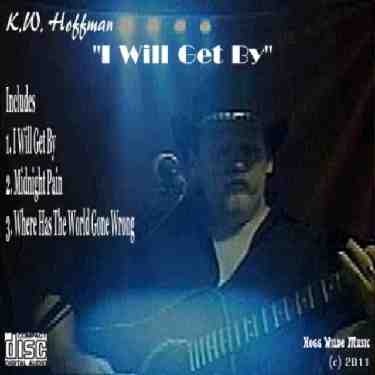 BIO:K.W. Hoffman was born & raised in Monticello, AR & began performing classic country music locally in the 1990's as a weekend hobby & through the years he has juggled a full time job while trying to make a career out of his hobby of music. He paid Tribute to a Legend by performing as a Hank Williams Jr. impersonator from 2004-2007. In March 2007 he auditioned for ABC TV's "The Next Best Thing" in Orlando, FL and landed an appearance on National TV and he also appeared on Florida's WFTV 9 local news. His performances as Hank Jr. included shows in LA, MS, FL, IA and his home State of Arkansas. Friends and fans encouraged him to write and perform his own music. He submitted 3 original songs to Arkansas's most popular, Award Winning, Country Radio Station KSSN 95.7. He won their "Home Grown Artist" of the week (2-13-09) for his song"Out of my Mind" & it was played on the air. KSSN featured his songs "Your Everything In The World To Me", "Out of my Mind", and "Waiting Patiently" on their Home Grown Music section and played "Your Everything In The World to Me"on the air. The songs are now listed with the Clear Channel Radio Network's the "New" & can be found on KSSN Radio's page @ http://www.kssn.com/new2/artists/i/284768 K.W. Hoffman's Independent Music career as a singer/songwriter has seen many performances the most memorable include 3 performances at the Songwriter Festival in Nashville, TN in June 2008. Featured Artist @ "The Poets Loft" Hot Springs, AR, & Counterpoint at N. Little Rock, AR. He has performed with various bands & musicians & still performs solo at various public & private venues & events. His CD of original music "Acoustic Crossroads" is on SALE at http://www.amazon.com/s/ref=nb_sb_noss?url=search-alias%3Ddigital-music&field-keywords=k.w.+hoffman&x=13&y=18 as well as single MP3's His latest accomplishment (Aug. 2010) was Runner Up in "Turtle Wax Jingle Contest" with his Jingle "Shine On" & he did recieve a montetary prize for his efforts. [ For BOOKING INFO contact hankjrtributeartist@yahoo.com or 870-942-8348] (ORIGINAL SONGS WERE WRITTEN, PERFORMED & RECORDED BY K.W. HOFFMAN. ALL ORIGINAL SONGS & CD'S ARE COPY WRITTEN {U.S. Copyright Office Registration Number / Date: PAu003423894 / 2008-03-05}AND MAY NOT BE USED WITHOUT CONSENT. TO INQUIRE ABOUT THE USE OF THIS MATERIAL CONTACT hankjrtributeartist@yahoo.com

Purchase my music now from GenuineCaring.com for $1.99 from the link below $1.00 will go to charity. I have more songs available, 4 of my songs the donation goes to the PEDIATRIC CANCER FOUNDATION, 1 song the Donation goes to the CHRISTOPHER & DANA REEVE FOUNDATION (the actor that played Superman founded this) and I have 4 songs available for the Charity of your choice. They have several Charities that they represent. This is a great way to give and you get some great music in return! https://www.genuinecaring.com/about/artist/27