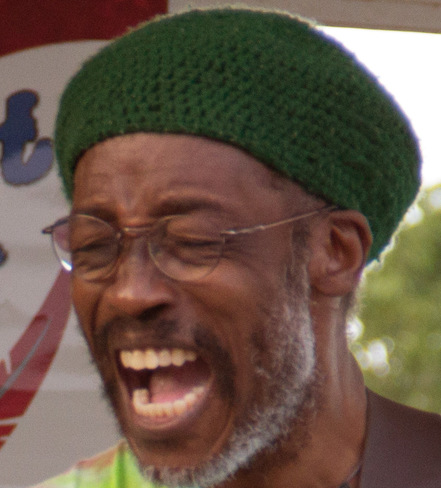 When Lasana Bandelé performed at his first Reggae Sunsplash in 1990, he already had one hit single behind his name. The audience quickly came alive to the sounds of "Living In Shacks." The Storitela, who had already been making waves locally, was now reaching a larger audience.

Writing in Jamaica's "Daily Gleaner," journalist Balford Henry says, "Lasana sees only the purpose in music...his songs are favorites of those who love what we call 'message music.' " And there are many messages in the songs which Bandele has penned over the years. He recorded and released his first single "Hanging Locks," in 1974, followed by "Send Us Home" in 1976.

During the next three-year period he studied at the Jamaica School of Music and his poems were heard frequently on JBC-Radio's "Groundings." The man from Catadupa became caught up in the world of music and fashioned his roles as songwriter, singer, poet, and musician - playing guitar, piano, flute, and congas.

Following his sojourn at the Jamaica School of Music, he began working as a composer, arranger and producer. In 1978 he released his third single, "Changes," and spent a year writing "Music News" for JBC-Radio. The Jamaica Cultural Development Commission awarded Bandelé a bronze medal in 1980 for his poem "Mad Dogs," and a Certificate of Merit in 1981 for his poem "Prison."

In 1981 he began arranging music for other artists, including Merlin Jones. A year later he was appointed Managing Director of Truth and Rights Production Limited, a production company that produced music for budding artists. In 1984, Bandelé formed Storitela Music Limited and Storitela Publishing, and began producing his own songs.

After the success of his first single on his own label, "Living in Shacks" in 1989, Bandelé produced his debut album, "Storitela," which included the hit single, along with "Big City," "Subway Blues," "Break Free," "Bird Land," "Waiting Inside," and the title track, "Storitela."

Says Dermott Hussey, Music Journalist, "Lasana Bandelé is an original whose words and music succeeds beautifully because it is what exciting music does best, it surprises us with the delightful discovery of places where we have never been … " "...his mellow voice rhymes for every spoken work. A brother like him will come to join nations, as his lyrics and teaching are evident in his debut album," says Aleece Meikle of Reggae Report Magazine.

In 1992 the Jamaican Broadcasting Corporation filmed and aired a one-hour television special on Bandelé, highlighting his music and poetry. Also, in June he performed at City Stages, a major festival in Birmingham, Alabama, and was voted Best Reggae Act. He also performed at The Chucker and the Birmingham Arts Association where he held a Poetry & Songwriter Workshop. 1993 saw several guest appearances at both Ciboney Resort and Swept Away Resort on the North Coast of Jamaica, along with a sparkling performance at Sumfest in Montego Bay, Jamaica.

Bandelé's music and poetry is warmly received in San Francisco. He was a featured poet at several poetry clubs, and worked in association with the San Francisco Public Library to provide a series of concerts, poetry readings for the public. Back in Jamaica in 1994, he released the single "All The Brothers And Sisters Are One" and delighted the audience in his third Sunsplash performance.

1996 highlights his first entry into the Billboard Chart with "Cassidy" on the "Fire On The Mountain" various Artist CD 'Reggae Celebrates Grateful Dead.’ "Storitela" is now on CD and features additional new songs. In 2005 he recorded the wonderful "Don't Wait" written and produced by Ray Contreras of Racy Music on the In Memory Of .... various artists CD.

Since 2000, Lasana embarked on the study of Computer Science, Multimedia, Action Script, HTML, Photoshop, Web Designing, Intro to Film Production, Advance Film Editing, Sound Engineer, set up his studio and recorded Love On The Freeway and other projects.

In person, this quiet, centered artist radiates warmth and the rhythm of his poetry. His persona easily translates when he performs live, whether at major festivals or in smaller, more intimate gatherings such as clubs and theaters. The Storitela is a man whose time - and music - has come. Lasana Bandelé’s pre-release single, "Love On The Freeway" from his upcoming CD is available on iTunes.com, Amazon.com, Rhapsody.com, eMusic.com and cdbaby.com and other major stores worldwide.

Lasana has added Author to his titles with the publishing of this book of poems, "Scent Of Cedar" by Lasana Bandelé. Distributed by https://www.smashwords.com/books/view/474443
available at Apple's iBook Store, Amazon.com, Barnes&Nobles and all major eBook retailers Worldwide.
Buy on iTunes: http://goo.gl/terbzv
BOOK TRAILER: http://goo.gl/ASnzq3