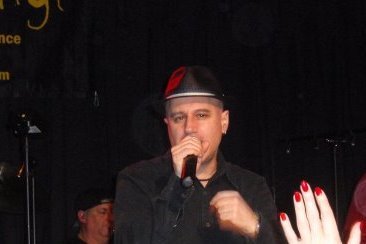 About Marc Hoffman and Friends

New York City-based Marc Hoffman not only works regularly as a session drummer and singer, but is an accomplished songwriter and producer as well, working out of his East Midtown Manhattan Studio. Marc’s songwriting speaks for itself. His song “The Rain Came Down” (co-written w/ Elliot Weiss) appears on one of Japan’s best-selling recording artists, Miho Nakayama’s CD, which went to #4 on the Japanese Billboard Chart. Another song of Marc's, “Compartir” appears on the album “Aqui Estoy” by EMI/Latin recording artist, Jailene. Two other songs of Marc's were recently covered by two new rock bands from the UK, and made some waves on the British and Japanese charts. In addition, Marc wrote, produced, and performed two songs which appear in the Troma Productions' Cult Classic Film, "The Toxic Avenger". Many of Marc’s songs have been featured on national daytime soap operas for CBS and NBC. Marc also writes and produces jingles, as well as composing for film. He recently scored along with partner Ed Kessel, the music for two full-length motion pictures entitled "Natural Forces", and "Some Fish Can Fly", the latter of which received critical acclaim in NYC. Recently, Marc has teamed up with Pop Singer/Songwriter Keyboardist Lauren Gibbs. Together they have been making their mark on the internet with the success of their pop gem entitled “Believe” Great pop track!!! This song has been #1 and 'featured' on nearly every MP3 site. "Believe" has been listened to and downloaded by THOUSANDS already.... don't miss it!! “Believe” hit #1 on Soundclick.com, #1 on AMP3.com, #2 on Musicmatch.com, and has remained in the Top 10 Most Popular Downloads on Musicmatch.com for over one year. “Believe” has also been picked up by retailers in MP3.com’s Business Music Service Program, and receives in excess of 20,000 plays per month in retail establishments such as Rubio's Tex/Mex restaurants, Petco Pet Stores, the Minneapolis/St. Paul Airport, and others. Most recently Marc scored some music for VH1 Classic’s “Decades Rock Live” concert series. He has also been writing with Gioia Bruno of the very popular Girl Group, EXPOSÉ. Marc will appear on the new Christmas Album due out in 2007 by Legendary Rocker “Tommy James”. Currently, Marc is writing and producing songs for an upcoming film from director Stewart Raffill.
Marc performs regularly as a drummer/singer in the NYC metro area, and has been seen recently performing with Blues diva “Nikki Armstrong”, as well as upcoming Blues Artist Dave Fields
He also volunteers his time to NYC non-profit organization Musicians On Call in which he does 'in-room' performances for patients at Memorial Sloan Kettering Cancer Center.