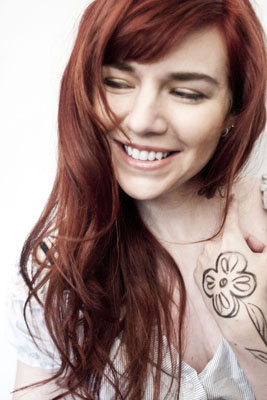 "If the Beatles & Tori Amos had a child raised in Russia by Tchaikovsky, that would be me," smiles Russian-American singer/songwriter, Marina V

The L.A. Times calls Marina's music "hauntingly beautiful", and the Prague Post praises Marina for having "the voice of an angel." But we'll let you judge for yourself :)

Marina has recently raised almost $30,000 from her amazing fans to record an album with an incredible producer in Hollywood, Guy Erez (Gipsy Kings, Ryan Cabrera, CBS Records, etc), and the album will be officially released worldwide June 2010.

Marina has played over 600 shows worldwide (including the world-famous Kodak Theatre in Hollywood, NACA Nationals showcase, Russian Embassy in Washington D.C., and many other incredible venues).

She has had several of her songs featured recently on NBC's "Days of Our Lives", and her music video was featured on YAHOO! worldwide entertainment page

Thank you to everyone on ourstage for voting for Marina's song "you make me beautiful" to be #1 in March 2010 (GRAND PRIZE!)!!!

To read more about Marina & to get a couple of free downloads - visit www.MarinaV.com