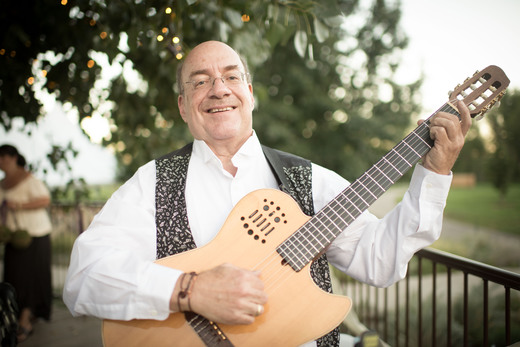 ERIC ROBERTS is an accomplished guitarist and bassist as well as composer, and has been playing professionally since the age of 16.  He holds a B.A. in Music from Ithaca College and a Master’s in Music from the University of Miami.  He has enjoyed a successful career playing in Broadway shows, backing up name entertainers such as Chuck Berry, The Fifth Dimension, The Drifters, Bob Hope, Joan Rivers, Anthony Newley, Maureen McGovern, Chita Rivera, the Smothers Brothers, Chubby Checker, Bobby Rydell, Danny Ganz, recording with the Orchestre Suisse Romande, performing solo guitar concerts, giving music workshops, and providing music for every type of occasion.  His repertoire ranges from classical to jazz, brazilian to new age and nuevo flamenco.  He works as a solo performer with tracks, as a guitar/flute duo and with a quartet.  Eric's own original music encompasses a variety of musical influences from Paul Winter and David Darling to Ralph Towner, Eberhard Weber and Pat Metheny as well as the music of Brazil.  His own unique sound comes from a melding of instruments -- from the classical guitar, acoustic bass and guitar synthesizer to the mandolin and the bandura (a Ukrainian instrument akin to the harp).

His debut CD, “IN A SILENT PLACE”, featuring world renowned cellist, David Darling, has been receiving accolades the world over, and the track “Flowing” became a finalist in the “new age” category of the 2009 Independent Music Awards.  Additionally, the track “Cella’s Song”, written for his wife, won first prize in the “instrumental” category of the 2007 USA Songwriting Competition.  His music can currently be heard on XM Radio as well as Comcast’s “Music Choice” channel on their “Soundscapes” program.

His new EP, “MY BRAZILIAN HEART”, features 6 of his smooth jazz and brazilian compositions including “Children’s Song”, which just won first place in the “instrumental” category of the 12th Annual Great American Song Contest.

Tracks from both have been licensed via Pump Audio to HBO, A&E, and other cable channels.

In April 2012 he was voted "Best Male Jazz Artist" at the first annual Independent Music Channel Awards held at the legendary "House of Blues" in Los Angeles, CA.