Native June's music is rooted in cities, highways and taverns across the Midwest and abroad.  It smells like a 1978 Ford pickup truck barreling through the back hills of Southern Indiana (where Gabe grew up) and it crunches in your mouth like broken teeth at an English pub on a Saturday night (where Tristan chills out).  Their sound is also reminiscent of The Clash, Kings of Leon, The Killers, Modest Mouse, Tom Petty, Bloc Party, Minus the Bear, and the Juliana Theory

The atmosphere during Native June's live shows is infectious.  They have played over 100 shows in the last five years, rockin' out at clubs and festivals in Los Angeles, San Diego, San Francisco and Santa Barbara.  The band has shared the stage with national acts including Spacehog and Ludo at the Key Club Hollywood, and played as headline acts at the Whisky a Go Go, Troubador, Roxy, Viper Room, House of Blues, Hard Rock Hollywood Blvd, and other infamous Sunset Strip venues.

Native June was also crowned the winner among 50+bands in the 2009 Battle of the Bands competition on the Santa Monica Pier and featured alongside Muse, Jet, New Found Glory, Dashboard Confessional for Saturday Night Magazine's Compilation CD distributed by MTVu and Virgin Megastores.  They have also performed on national TV on the USA Network for the Before 'n After Movies to over 2 million viewers

Native June released their first album "Whiskey & Walnuts" in 2006, "Daisy" as a single and music video in 2010, and will release their upcoming album "Ocean to Sunset" in spring 2011.  The album is produced by Tony Maserati, a two-time Grammy-award winner for his work with artists ranging from Beyonce, Jason Mraz and the Black Eyed Peas.

Native June signed with Planet LA Records and a publishing deal with the MusicBox film/TV library catalog in 2010. 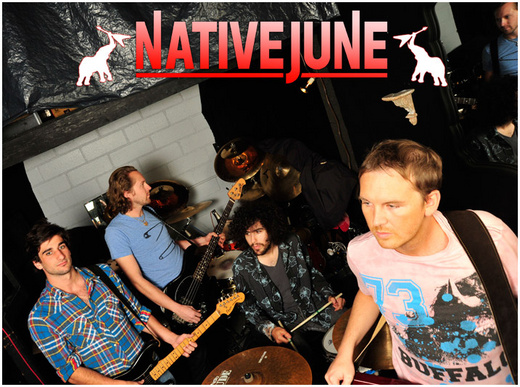