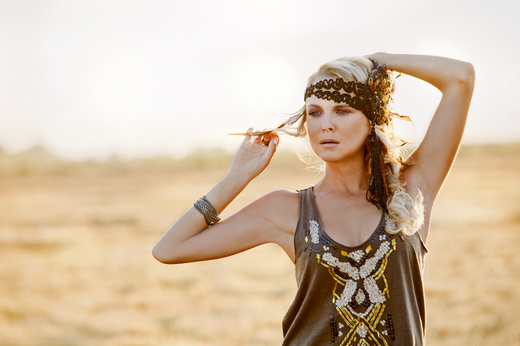 Paige Nichols is a standout singer-songwriter making waves in the New York City music scene. Described as having a soulful Fiona Apple sound and Sara Bareilles-type songwriting skills, Songwriter’s Monthly calls Paige’s music, “uplifting, rousing, and empowering.” Nichols has an uncanny knack to transform romantic disasters in her personal life into charged-anthems where her audience isn't just blown away by the raspy, soulful tone of her voice; they're instantly connected with the message in her genuine lyrics. Its her contemporary vintage sense of style, however, that compliments her instrument and sets her apart from the cookie-cutter acts in the world of modern music. Growing up in a quiet town in Ohio, Paige was a creative spirit from the start. As an only child, Paige quickly realized that she had to entertain herself- and music became her passion and her life. At the tender age of three, Nichols attended a local production of Annie, and was immediately inspired to be a singer. There was no turning back… but the ride has not been an easy one. Paige has been a veteran at the keys, playing piano since the age of nine. Her musical background cross-polinates classical training and musical theatre, but it was her move to Manhattan to attend a conservatory for the arts, where the rough patch in her career began. Soon after arriving in NYC, Paige quickly realized that something wasn’t right with her voice. “I could barely speak, and when I tried to sing my vocal chords weren't vibrating correctly. I found out I had acid reflux,” Paige remembers. After doctor’s appointments and therapy, Nichols is thankfully completely healed and is not letting her health get in the way of her dream. Since Paige’s voice has returned, her singing career has kicked into high gear. Nichols has worked in the studio with producer Mikal Blue (Colbie Caillat, One Republic, Carrie Underwood,) as well as recorded with, drummer, Victor Indrizzo(Alanis Morissette, Gwen Stefani, Shakira,) and guitarist,Andrew Williams (Five for Fighting.) She has already conquered the New York City venue circuit with shows at the Rockwood Music Hall, The Bitter End, Caffe Vivaldi, and The Living Room and has proven herself as a talent performing solo with her piano at these gigs. In 2010, however, Paige is ready to match her studio recordings with a full band backing her up on stage. Gifted with remarkable talent, and driven by an insatiable appetite for success, Paige Nichols is ready to take the industry by storm. With enticing song titles, such as, ‘Little Man Big Gun,” and the mysterious, “Want” and “Haunted,” Paige has already grown a strong fanbase with the nightlife crowds and is preparing for a multi-city tour later this year. When Paige isn’t doing music, she can be found tuning into HBO’s True Blood or The Office. As a creative spirit, she enjoys yoga, people watching in New York City, and astrology. Paige is currently spending time away from her love Nyc while she writes and records new material in Los Angeles.